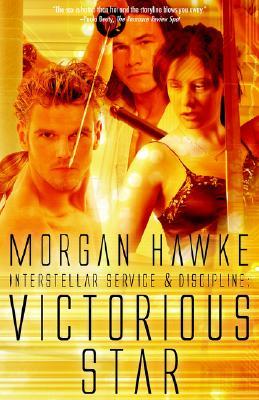 Okay, so I actually ended up loving this because it was like a more explicit version of Linnea Sinclair's Dock Five Universe or Ann Aguirre's Sirantha Jax series, and as a Star Trek AND Star Wars junkie who is starved for romantic sci-fi that has GOOD world-building, VICTORIOUS STAR was practically a godsend. I knew from the very beginning that it was going to be good. A strong heroine who can psychically interface with ships who's on the run from the laws that be? YES. And she gets caught by a sadistic captain and his gleefully mischievous second in command who is basically like a hot vampire elf alien with some VERY interesting physical attributes? DOUBLE YES.

This is basically smut with plot, but the plot is so good that at times it almost overpowers the smut. If you've read C.S. Pacat's THE CAPTIVE PRINCE, this is similar in terms of themes and the plot-to-erotic content ratio, although VICTORIOUS STAR goes a step further with some really edgy stuff, including body modifications and some other things that I am not usually keen on but worked for the story because it was science-fiction and actually tied into the plot.

Parts of this book share similar themes with the Omegaverse erotica, including hierarchies, knots, and major dub-con. Especially in the beginning, where it's like, "Whoa, omg." At times this book could be seriously brutal, but-- again-- the author made it work with good writing and serious character development. It never felt like the author was apologizing for such behaviors; instead, there was an acknowledgement that what these characters were doing was beyond the pale, but that's just how they rolled. And honestly... again... it kind of worked.

I thought Ravnos and Seht were both hot and I liked their relationship with each other almost as much as I liked their relationship with Victoria. The third book in the series is actually a prequel to this one which is about how they met-- I was surprised by the twist! Actually-- I was surprised by a lot of twists. In some ways, this is like really well-written fanfiction, because the universe is so developed that it leaves the author fully free to explore her characters and their motivations. I'm super impressed at how naturally it all flowed and I love, love, loved the idea of sentient spaceships and the court intrigue among Seht's people, who really were a lot like the characters in CAPTIVE PRINCE.

My only complaint is that there was some not-so-great writing in that the author was overly fond of words that I really don't like (personal preference), and they occurred with enough frequency that they pulled me out of the story and made me go "ew." Ditto some things that happened in the scenes with these characters that just pushed my comfort zone too much. It's a tribute to this writer's skills, honestly, that she was able to get away with things that would ordinarily have me chucking a book across the room, but it definitely made this book a four star read instead of a five star one, although I think it was good enough to be a keeper that I'll want to periodically reread.

If you like edgy reads and gritty space operas, you'll love this book.