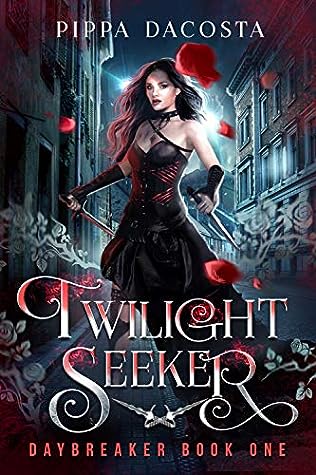 TWILIGHT SEEKER was so much fun. I've read several books from Pippa DaCosta and I usually like them-- but I think this might have been my favorite work from her yet. It's such deliciously trashy brain candy, of the compulsively readable variety that I haven't really encountered much since my Quizilla days. Since I rate books purely on entertainment value, I have a special place in my heart for books that tell wickedly good stories, even if some snobs might not exactly consider them-- *sniff*-- fine literature.

If you like Ilona Andrews's Sweep series, I think you'll really enjoy these books because it's actually a lot like that with a dash of Underworld (2003) thrown in for good measure. Lynher is the proprietress of a waystation between worlds-- a place that kind of doubles as train station and hotel and seems to have a mind of its own (like the inn in Sweep). The MC wears fancy dresses and sees to the needs of her supernatural clientele like the witch in the bathhouse of Spirited Away (2001), but tensions are mounting between fae, vampire, and demonkind, and Lynher is caught up in the crossfire.

Apparently this is NOT a reverse-harem series and that honestly makes me sad because all of the characters in this book are super hot. There's Rafe, the incubus, and Jack, the vampire-- both dangerous, both wanting to devour Lynher in numerously exciting ways. There's also a bunch of side characters, including her brother, Kensey, and his lover and secret changeling child, Etienne, who works as Lynher's assistant. All of the characters have distinct personalities and were interesting to read about. I think my favorite parts of the book revolved around the court intrigue occurring between the species and the cruelty of the vampires, who make no secret of treating humans like livestock.

I'm actually not sure how to describe the plot of this book because now that I think of it, there really isn't one. Lynher just gets sucked into a bunch of secrets and drama that seems like it's building into something big and the book ends with an actual bang (although not the kind I wanted-- *wink emoji*). Normally, character-driven fantasy novels don't work for me, but this worked for me. The author has grown a lot as a writer since her Veil series.