Prisoner of My Desire by Johanna Lindsey 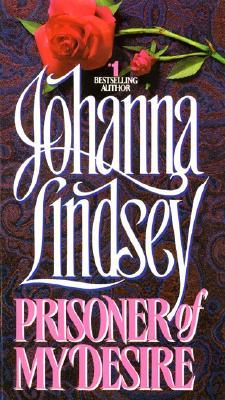 This was a buddy-read with Tiana! I've been wanting to read PRISONER OF MY DESIRE for years. It's got a pretty crazy premise. The heroine, Rowena, is forced by her stepbrother to conceive a child for strategic reasons (and also because he wants to bone her). When her husband (an old man) dies, her stepbrother kidnaps a man off the street who has his coloring that they can pass off as the real heir. Unfortunately for the two of them, that man is Warrick de Chaville, a titled knight, who is infuriated at being chained up and raped by the lady of the manor.

When he's freed by a sympathetic servant, he launches an attack against their home, killing the guards and kidnapping Rowena, where she's imprisoned in the dungeon until he gets there and starts raping her as punishment for raping him. But oh no-- this being a romance novel, it turns into a cute little domestic drama while I'm just sitting here like O_o.

To be clear, the rape didn't bother me. The heroine knew what she was doing was wrong (unlike that fucking heroine in Bridgerton) and she had her reasons for doing what she did. It was an awful scene portrayed in all of its horror. By contrast, the scene when Warrick rapes her felt very toned down and the subsequent ones were, um, more like seduction than rape and the way they were written really didn't convey the gravitas that they should. I thought it was interesting that the author made the heroine's ill-treatment of the hero so much more horrifying and upsetting than the hero's ill-treatment of the heroine. I wondered if it was deliberate or unconscious.

If this had been written by a different author, I think the story could have been really great. The fact that they both raped each other was both disturbing and interesting, in a totally medievally appropriate "eye for an eye" sort of way and if the psychology of their torment had been explored further and had their relationship been more gradual in development and speculative in nature, I would have loved to see the author explore a romance between these characters borne of remorse and attraction. I didn't get that.