The Initiation by Nikki Sloane 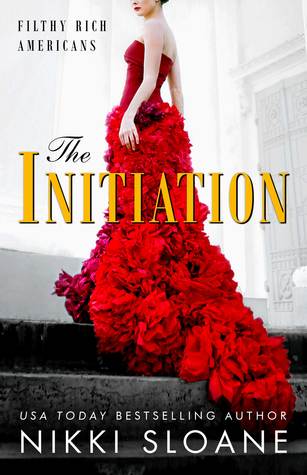 Will this book be the next Great American Novel? No. Do I really care? NOPE! THE INITIATION was recommended to me by someone who knows that I love dark, trashy, off-the-wall reads and it kind of reads like a 1970s bodice-ripper in that it is unapologetically trashy with some pretty messed-up scenes. I've read a lot of crazy stuff and even I was like "OH WOW WASN'T EXPECTING THAT" at the twist(s). So the book gets three stars automatically for keeping me engaged to the end, turning pages like I was working a finger treadmill.

The writing is... not the best. There is a five-star story buried in here but so much of it was just too silly. The attempts to tie this book into Greek mythology didn't really work and came across as too forced, in my opinion, and I feel like Marist gamed her "not like other girls" power-ups a little too aggressively. Who takes a book about mythology to a party and wanders into someone else's library to read it? I'm bookish and antisocial and not even I would do that. (Everyone knows you say you have to go to the bathroom and then read the book in there. Sheesh! Then nobody's going to come around checking on you JK.) Also, sorry girlfriend, but green hair is not a substitute for a personality.

So this Billie Eilish wannabe is a high society girl but her parents have money problems and her sister is engaged to the cute rich guy who wants her, Marist, to save herself for him. Whaaaaat. (And that's not even the twist.) It gets even weirder from there, in a series of events that result in her sister and Royce (hot guy) breaking off the engagement, and Marist being promised to him instead. But Royce's family is super weird and everyone's just a little too excited about Marist being innocent. Creepy? I think so. BUT WAIT-- IT GETS WEIRDER. Annnnnnd... that's all I'm going to say because I really don't want to spoil it. If you're concerned that you're going to get squicked out, it's probably because you will be and I'd definitely check out some of the reviews with spoilers if you are worried. I knew what was going to happen and I was still shocked, which is testament to Sloane's writing ability.

As I said, the writing is a bit cheesy and it was trying a little too hard to be more than it was. If you're familiar with Skye Warren's work, Sloane's style is very similar to hers, particularly the Endgame series. I think anyone who likes SW will really like Nikki Sloane. There is a cliffhanger but only in the sense that opens up more questions to be resolved in later books. You definitely get your fill of OMG WHAT with this installment. I'm super curious about the rest of the series and will be checking them out. You can't just leave it there!