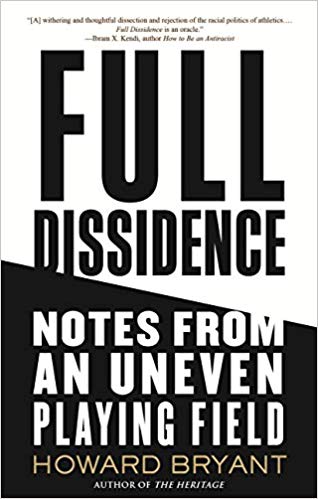 This is such a beautifully written book and even though sports is a subject Bryant circles back to again and again, it is not the primary focus of this book, which was my main concern as someone who watches zero sports of any kind: I was afraid that some of the subtler sports metaphors and nuances might be lost on me. But no, FULL DISSIDENCE is so much more than a chronicle of injustice in the athletics industry (although there's an essay on that, too). Instead, is an open letter to America citing many of this country's greatest flaws, and why it is not enough for us, as a nation, to issue a "mea culpa" and go on with our lives, only to repeat the same problematic behaviors.

One of the best essays in this collection is about Colin Kaepernick, but there were also several more I enjoyed: the romanticization of white poverty as the first step on a staircase to a class mobility fairytale while at the same time taking Black poverty as the status quo; performative humanitarianism; the importance of holding police accountable; and so much more. I liked some of the essays more than others, and I feel like the title collection, FULL DISSIDENCE, was so broad in scope that it was hard to achieve focus, whereas everything from Why Tonya? onward was laser-direct, which writing so sharp that you could use it to etch metal.

FULL DISSIDENCE is not an easy collection to read. It's clear a lot of thought went into each word chosen, and Bryant deals out some harsh truths. When you have a country that has injustice embedded in its very foundations, changing the status quo becomes a polarizing act in and of itself because there are people who will become so angry and defensive at the thought of someone "taking away" what, to them, has always been comfortable and easy, that they will offer any hurtful excuse to keep things exactly as they are. All of these essays delve into those pain points with a clear-eyed frankness that is chilling in its precision. For anyone looking for a similar collection of essays, I'd recommend Lauren Michele Jackson as a follow-up, as she discusses many similar issues using pop culture as a focus.