Not Your All-American Girl by Wendy Wan-Long Shang 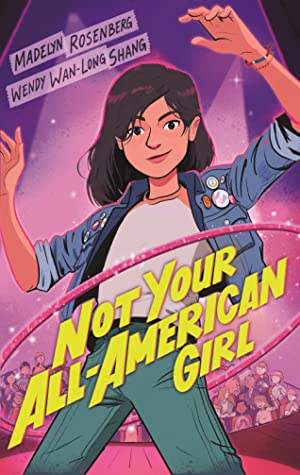 This was so cute! After a slew of some really dark reads, NOT YOUR ALL-AMERICAN GIRL was precisely what I needed to lift my spirits. This book is about a sixth-grader named Lauren who is Jewish and Chinese. She loves to sing and is incredibly talented, but when she tries out for a musical set in the 1950s, the teacher refuses to even consider Lauren for the role because Lauren doesn't fit what the audience will expect for the image of the "all-American girl."

So the role goes to Lauren's less talented, fair-haired and blue-eyed friend, Tara, instead.

This is a great coming of age story set in the 1980s. And while it captures everything fun and nostalgic about the 1980s-- the music, the fashions, the toys-- it also points out a lot of the things that weren't so great: like the racist stereotypes and the sexism. One thing in particular that gets called out is Sixteen Candles and its use of stereotypes that would never (hopefully) make it into TV today.

I liked NOT YOUR ALL-AMERICAN GIRL a lot. It didn't feel heavy-handed at all, the way some of these middle grade books sometimes can, and I thought both authors did an excellent job making Lauren feel like she had an authentic preteen voice. Sometimes she could be selfish or immature, but man oh man, when she clap-backed at Kid Racist and his father in that restaurant, I wanted to stand up and scream YESSSSSSSSSS! I also loved Lauren's button-making hobby. I didn't have a finished copy so I didn't get full illustrations of all the buttons but I really liked the ones that did make it into my ARC. Super cute and what a neat and amazing hobby!

Anyone who likes smart middle grade books about strong female characters will love this!