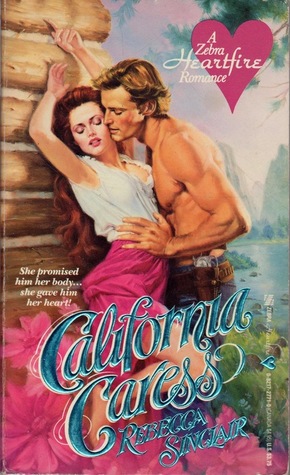 Oh, be still my trashy heart! Ever since I saw that cover! That title! I was in love with this book. I needed this book. I almost didn't even care what it was about because how could I possibly be in my right mind and turn down the opportunity to purchase a book called CALIFORNIA CARESS with my coin? It just isn't done.

So I bought the book for $2.99 and began to read and even though one of my eyebrows spiked when I found out it was a-- *Dracula hiss*-- Western, I was still intrigued. Mostly because Hope isn't like other bodice-ripper girls. No, seriously. She is no doormat. She punches the hero in the face when he gets out of line (he was a bad man, to be fair). When she finds out that her mentally disabled brother has been tricked into fighting a bunch of bullies who want to stab him and steal their gold-mining claim, she hires the hero, Drake, to fight in his stead. He bullies her into paying with her body, as well as their coin, but she's just like "haha okay" while lying through her teeth and having no intent to pay.

The hero, Drake, is a tough gunslinger mercenary guy from the East Coast with a sad history that has made him into the bad man that he is today. He's come to California to get money and revenge, and Hope's involvement has only expedited the process, because she's drawn a whole bunch of attention to herself and to him and Drake's evol brother hates him enough to want him dead for reasons. A whole bunch of unresolved sexual tension and one failed assassination attempt later, and they're on their way back to Boston to confront the evol brother.

CALIFORNIA CARESS, despite the silly title (or maybe because of it??) is a really fun Western romance. I didn't even think I liked Western romances but my only acquaintance with them was through authors like Sandra Brown and Diana Palmer and their heroes are a bit more caveman-y than I like. Drake is definitely an alpha in every sense of the word but he's really not as bad as he could have been (*stares at Steve in SWEET SAVAGE LOVE*). In several parts... he's actually really, um, sweet? And that was actually what really won me over to this book: it has fairly deep characterization and all of the characters have motivations for doing things (except the villains who just exist to be hated). There's a deep convo on a boat that Hope has with some old lady and it's all about living your life for yourself and not letting grief weigh you down and it's SO MEANINGFUL. I got misty-eyed.

The only things I didn't really like about the book were some inconsistent pacing (lots of slow parts after the cabin fire), how Hope kind of gets beaten down (even though a lot of that is grief and mental exhaustion, I think, so I'll give that a pass, even though I missed the conniving "fists of fury" Hope from the beginning of the book), and a lack of a final show-down with the evol brother and his wife. The "okay, bye" resolution didn't really work for me, especially after the murder attempt.

If you like Westerns, you should definitely pick up CALIFORNIA CARESS. It seems like only a couple of this author's books were actually rereleased into ebook but I'm going to swipe 'em all.