The Black Rose by Christina Skye 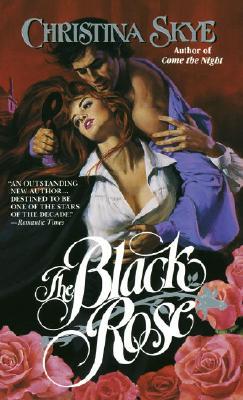 I scored this book as a Kindle freebie several years ago and it's been languishing in The Library of Purgatory and Laziness™ for years. Lest you get confused by the name in the Kindle store, it was originally published as THE BLACK ROSE, but the author republished it as SEVEN NIGHTS WITH A PIRATE along with some apparent revisions. Comparing the reviews for those who read the original with those who read the updated digital version, it seems like some rapey scenes were removed and some sexy scenes were added. To what effect, I'm not sure, as this was still pretty rapey.

Our heroine is a woman named Tess, who masquerades as a local smuggler called The Fox. (She also works with the real Fox, but dresses up like him when he is busy.) When she's not smuggling, she operates the inn that also serves as their base of operations/hideout. Tess is haunted by her abusive father, who appears to have locked her in the seller and also sold her out as a prostitute to equally abusive and opportunistic men. When he died, he left her with debts as a last "Eff you." She's still trying to pay them off.

Our "hero" is a viscount named Dane St. Pierre, Lord Ravenhurst. He's a viscount and a veteran of the still-ongoing Napoleonic Wars, and haunted by the deaths of his friends and his own close brush with death aboard his ship. He was a childhood friend of Tess's, and when his superiors draw him back into military business to investigate a smuggling operation in the town of Rye where a traitor might be feeding secret intel to the French, he is shocked to see the child he knew all grown up.

Until about 50% of the way in, I thought for sure that this was going to be a 4- or 5-star read. Tess was such a great heroine- in fact, she was everything I love in a heroine: no-nonsense, smart, and brave. Dane was the perfect dangerous hero, and the unresolved sexual tension between him and Tess was off the charts. I also loved the cat and mouse between them, when she did her smuggling and he did his investigating; you couldn't help but wonder - what would happen when he found out??

40% of the way in, Dane finds out that Tess is involved with smuggling and thinks she's the lover of the Fox and he, like, loses his sh*t. I think in the original he rapes her, but in the update, the author tones it down to a "civil" sexual assault *eye roll*. She flees and ends up hitting her head, and her head injury makes her blind. When she wakes up, she's in the care of love interest #2, Andre, an equally rapey pirate, who definitely takes advantage of her in her incapacitated state.

The last act of the book was so crazy that I honestly didn't know what to expect. Which love interest, if any, would Tess end up with? And what would happen to the redundant one? Who was the traitor, after all? What was the dealio with Tess's dad? And how on Earth would this story end?

The ending, in all fairness, was actually pretty good. There was a twist I wasn't expecting (although in retrospect, I probably should have expected). We find out who the villain was, and I wasn't expecting that either, so that was cool, too. The heroine even manages to get in a duel with Dane, and I am very much pro lady duel. I would rate this book much higher if not for the fact that Tess's character development really suffered when she entered the "care" of Andre. I loved how strong she was in the beginning, but she really wimped out when that pirate dude did his misogynistic flexes.

I'm torn between feeling okay about this book and guiltily liking it because I am trash, so my feelings are floating between a 2.5 and a 3. It was action-packed, filled with swashbuckling, smuggling goodness and some twists that really caught me off-guard. If you like vintage romances and want to be part of the 90s Bodice Ripper Experience™, you could do worse than to pick this book up.