Spice and Smoke by Suleikha Snyder 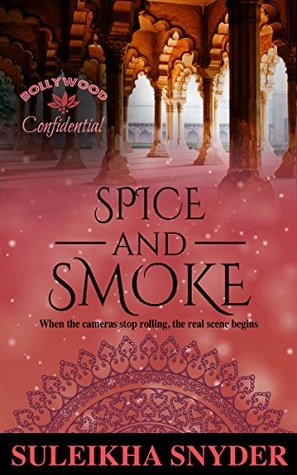 SPICE AND SMOKE is 1980s-style glitter trash set in Bollywood, filled with smut, relationship drama, and celebrities. If that's not reason enough to read this, I don't know what is. Another reviewer compared this book to Jackie Collins and that is a fairly apt comparison, as both deal with celebrity life, drug use, and promiscuity with a rather stark and admirable frankness.

The first book I read by this author was TIKKA CHANCE ON ME, which I didn't like for a variety of reasons. However, there were elements of the book I did like, and whenever that happens I usually don't write the author off completely, giving another one of their books in a different series/universe a try, because YMMV.

SPICE AND SMOKE is definitely a much different book than TIKKA. TIKKA was smut with a tiny side of plot, and read like an Alexa Riley quickie, whereas SPICE is a full-fledged story told in a very unusual and slightly surreal format which some readers may find disorienting but I found quite enjoyable and unique.

Avinash, Trishna, Michael, and Harsh are all Bollywood actors working on a big movie with their director, Joshi. Avinash and Trishna are married, but Trishna has been carrying a torch since her teen years for the heartthrob, goody-goody actor she worked with on her first movie as a teenager, Harsh. Avinash is bisexual and appears to prefer men, even though he's married to Trishna. They have an "open" relationship (although that openness appears to apply more to him than Trishna), and the current object of his desire is Michael, a biracial (white/Indian) actor who is openly gay.

Their sexual fantasies about each of their love interests upon encountering them are very surreal, and very Bollywood (which I imagine was the intent), and so are the scenes they're filming from the actual movie, which are interspersed between the romantic plotlines and often mirror the actors' own lives to highlight their emotional tension (which is cheesy, but I like it). Some readers have said that the relationship is polyamorous, but it feels more like cheating with permission (and in the beginning, in Trishna's case, cheating without permission). I also didn't really like that the "open" relationship only applied to Avi, and that he was actually quite jealous and angry when Trishna hooked up with Harsh in the beginning, until he realized that the arrangement could work to his advantage.

I liked the two main couples a lot, and reading about their interactions and their relationships as they changed and developed was really fun, and I liked it the best towards the end when they all became friends as they played musical beds - that part, more than anything, was totally Jackie Collins. What I didn't like was the addition of a third random couple towards the end, Vikram and Sam. Sam was very obnoxious and even though he had real problems, like drug abuse and not coming to terms with his sexuality, I felt like he was introduced too late to really explore that to its full potential.

SPICE AND SMOKE is a quick, light read with tons of drama, leads of color, and lots of hot sex involving people of a variety of sexual orientations. I'm surprised more people aren't reading these, because well-written smut is few and far between, and this was really quite dramatic and fun.