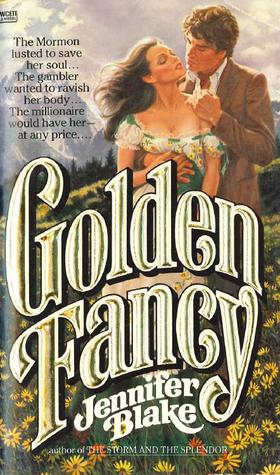 I got into the bodice-ripper game pretty late. I was born when they were starting to phase them out of the romance literary canon, and since my mom didn't read them (and, in fact, actually abhors the romance genre as a whole), there weren't any lying around the house for me to "happen" upon and traumatize myself with, the way some of you did with Rosemary Rogers and Christine Monson. I actually discovered my passion for bodice-rippers through Goodreads, where there is an active subgroup of women (and men) who devote their time and efforts to mining these gems from the dusty racks of their local thrift shops, or in mildewed bags at garage sales. Their reviews were so convincing that I began looking for these books too, to see if they were really as wild and crazy as everyone was saying they were.

Jennifer Blake has become one of my go-to authors in the genre because she not only delivers on the WTFuqery Experience™, her writing is downright pornographic at times in terms of how luscious her descriptions are and how broad her vocabulary is. I'm always learning new words from her that I'd never heard before, and I would happily listen to this woman describe food and furniture to me for hours; she makes everything sound so pretty. It should be illegal to be so eloquent.

My review for GOLDEN FANCY is going to have lots of spoilers because this is the type of book that you can't fully appreciate unless you know how disturbing and over-the-top it is. The heroine is a girl named Serena, and she's beautiful, innocent, virginal, et al. Her parents are dead, so she lives with a bunch of FLDS Mormons, and they judge her gentile ass but mostly just ignore her - except for their leader, Elder Greer, AKA Captain Crazypants, AKA General Unconsensual, who decides to take her as his fourth wife whether she wants it or not, and what better to do that than a bit of sexual assault? But Serena hears him coming and stabs him with a fork, and when she escapes her wagon to find all the other Mormons awake, they brand her as a hussy and kick her out of the group.

Alone, with only a trunk of belongings to her name and her dearly-bought innocence, she wanders the fields, only to happen upon a gambler named Ward. He sort of saves her, after nearly sexually assaulting her, too, but some bad weather interrupts him and instead he dumps her off at a boarding house. When he returns, he takes her to the bordello that he jointly owns with Pearly, AKA Catty Got Claws, the jealous AF OW, and puts her in his own bedroom where he - you guessed it - rapes her. Eventually, Serena decides Ward is OK, but there's lots of shenanigans conducted by Pearlie and her evol rapey henchman, Otto, to sully Serena's innocence and put her in her place, including starving her out of her bedroom to perform on stage, threatening her with assault, and drugging her and delivering her into the hands of a man who also wants her (but is too "gentlemanly" to take advantage of her while unconscious, thanks bro).

Nathan is the OM in this story and at first I liked him a lot, way more than Ward, because he's the guy who steps in when Ward goes off to do who-knows-what. He's a millionaire and friends with Ward, and he's the fairweather protector of one of the classier dames in the bordello establishment, a Spanish woman named Consuelo. Consuelo actually loves Nathan, but he has eyes only for Serena (because of course he does). Rather than going batsquat inside over it like Pearlie, though, Consuelo just executes a couple of sneaky but non-violent coups in the hopes of winning Nathan. Nathan, however, will not be denied, and manages to swoop in to marry Serena when Ward has an accident and is presumed dead by drugging Serena and then marrying her while unconscious. Such a gentleman. Also, it's worth noting that while this fuquery is going on, Serena is nine months pregnant with Ward's child, so I assume that she gave birth to the child while in this comatose state.

While all this is going on, there's a Jack the Ripper-like murderer going around and killing prostitutes. Elder Greer makes a reappearance, saying he'll have his revenge on Serena, and if he can't have the delights of her flesh he's going to whip it all off in the name of mortification. He's a special kind of crazysauce, is Elder Greer. But he doesn't have anything on Pearlie, who goes from being the madam of a bordello, to an opium addict, to basically a born-again-christian who is definitely very much pro-whip. Serena finds out that Ward isn't actually dead and cheats with him, and Nathan cheats with Consuelo while hating himself a little and despairing that Serena won't put out. At some point he threatens her with an ultimatum, and tells her that he's going to take her against her will or else die training (and then he falls to his death, so oops, maybe don't make such promises).

In other words, GOLDEN FANCY was glorious.

A lot happens in this book, and yet at times it still felt very slow. There are vast swaths in the middle where nothing of import really happens and this book ends up being much longer than it needed to be. I found myself skimming a lot during these sections. The parts that are good are seriously good. Can a book be "fire"? (Asking because I'm not exactly hip with the slang.) If so, I would say that the good parts of this book are definitely fire. Blake knows exactly how much crazysauce to pour on her bodice-ripper sundae. If this book had just been a little more concise, it would have been great.