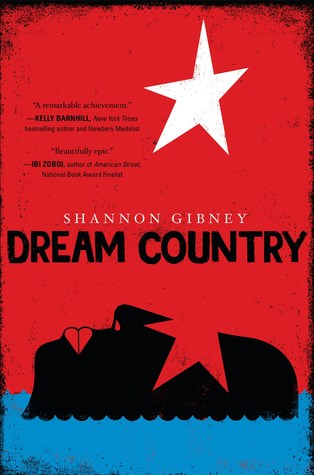 I've said many times in my reviews that the YA genre needs to start taking risks. For about a decade, YA has been snowballing towards "safe" and "stale." Young adults are young adults, and I personally think, as a reader and a writer, that we need to stop acting like teens and adults in their early twenties need to be protected from difficult subjects or explicit content, as 1) they're going to go ahead and find it anyway if they really want to read it, so you might as well to try and do it well and for the intended audience and 2) it's not like teens aren't experiencing things like sex, swearing, alcohol, and bigotry/racism in their everyday lives.

So before I even get into the content of DREAM COUNTRY, I want to say that I appreciate that the author didn't try to dumb down the difficult subjects in her book, which was, to my surprise, for young adults. There is a lot of graphic content, everything from genocide, to rape, to racism, colorism, privilege, explicit language (multiple uses of the N-word especially, but also the C-word), as well as white supremacy and slavery.

DREAM COUNTRY is a multi-generational family saga centering around a Liberian family. The first narrator, Kollie, is a high school student in the early noughties who struggles with not being "black enough" to fit in with the American black students, but also very much conscious of the racism he faces as a man of color, and the xenophobia he faces as an immigrant. The second narrator is Togar, which takes place in the late 1920s. Togar is trying to escape the militant slavers who are forcing Liberians to work the plantations owned by ex-slaves who colonized Liberia in the 1800s. Yasmine is one of those ex-slaves, who thinks that Liberia will be a new chance for her and her children, but she is taken aback by the sickness, the poor health conditions, and the rural conditions. Then there's Ujay and Evelyn, whose narrative is set in the 1980s, during the Liberian Civil war. The story ends full circle with Angel, Kollie's younger sister, who is now an adult in the 2010s.

As I said, this book is written the way it would be for any adult. Gibney does not balk at the idea of communicating the horrors of slavery, racism, and war to kids. And really, I think most kids don't have any idea how horrific such events are, because frequently they are sugar-coated or glorified in children's fiction. Reading this book makes you fully cognizant of the stakes. It actually reminded me a lot of Yaa Gyasi's HOMEGOING, although between you and me, I thought HOMEGOING was a better book because each character was more fleshed out, and their story fully developed.

That actually brings me to my biggest complaint with DREAM COUNTRY: it felt like an unfinished book. The characters' stories didn't really close in a satisfying way, and in my opinion, the most interesting POVs ended way too soon and the less interesting POVs dragged on forever. I would have liked to learn more about Togar or see what Kollie's experience was like when his parents sent him to Liberia. Angel's POV felt like an afterthought, and Ujay's was the only historical POV that actually provided new perspective on his descendants, whereas the others really didn't, in my opinion.

DREAM COUNTRY isn't a bad book by any means and it does some pretty amazing things, but there were also many points where I found myself bored by the subject matter, and given the nature of the subject matter, that should not be the case. I'm going to donate my copy to a high school now that I've done with it. Hopefully the kids will enjoy it more than I did. :)