Shades of Wicked by Jeaniene Frost 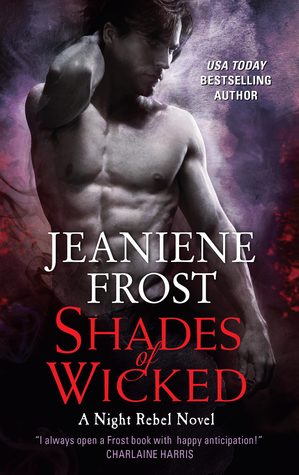 Whoa. That was the most addictive, fast-paced fun I've had in a while. Ever since I finished Ilona Andrews's Hidden Legacy series, I've been trying to find the next Big Thing to fill the paranormal void in my life. When I saw SHADES OF WICKED pop up as the deal of the day, replete with a sexy vampire hero who's basically a salacious playboy of the nth degree, I thought that might be it.

Ian is a master vampire who spends a lot of his time slutting it up or hanging out in brothels - that's actually where the heroine finds him in the beginning of the book, wearing a ringmaster's jacket and nothing else. Our heroine is named Veritas and she's also a vampire, but she's the face of the law and intent on using Ian as bait to capture a very evil demon who she has her own personal history with. As it turns out, Ian has a bone to reckon with this demon himself, and ends up as an unwilling pawn to help her catch him.

The sexual tension between these two is totally off the charts, and even though they come from opposite sides of the law and have about one hundred reasons to hate each other, they're more similar than either of them realize because of their dark and tortured pasts. I honestly didn't think that SHADES OF WICKED would get so dark, but some of the big reveals about Ian and Veritas hit hard. That was a pleasant surprise, settling in for just another paranormal romance and ending up with something deep. And speaking of deep, brace yourself for some of the hottest vampire sex ever.

I almost feel that SHADES OF WICKED shouldn't work, because despite the darker elements (and there are many), there is also a lot of humor, including some spiffy one-liners that actually made me laugh, and comic relief coming in the form of a fluffy flying demon dog. I didn't realize that I needed a fluffy flying demon dog in my life until reading this book, but I do. I do. Rather than dragging the book down, the inconsistent tone actually worked and made the pages just fly by. SHADES OF WICKED is my first book by this author, but it won't be my last - it's everything I love about the paranormal romance genre, wrapped up in a tidy package and tied off with a crimson bow.