Embrace And Conquer by Jennifer Blake 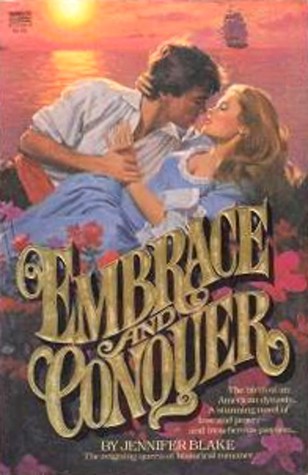 There are many reasons that Jennifer Blake is one of my favorite bodice-ripper authors. She's very generous about putting her books up for deals or freebies in the Kindle store (I've gotten most of her books for free), and a lot of them are available through Kindle Unlimited. Unlike some bodice-rippers like Catherine Coulter and Fern Michaels, she doesn't edit (read: censor) her books of their un-PC scenes; she appears to republish her books digitally in their original form, preserving the work in its integrity, which I love. Also, all of her books are basically a free history lesson. I tell all my friends and family members that I've learned things from bodice-rippers that I never learned in American or World History. These aren't just wallpaper dressing; they tell a periodcentric story.

EMBRACE AND CONQUER is set in Louisiana during the time it was briefly ceded to Spain. Citizens are chafing at the new ownership and pledging their French allegiance against the Spanish soldiers and Irish mercenaries parading the streets, consequences be damned. The heroine actually meets the mercenary hero, Morgan, when her adopted brother makes a servant dump a chamberpot on his troops from their home as a political statement. Fearing for the servant, the heroine, Felicite, takes the fall - and sparks fly.

Later, a bunch of traitors are rounded up, and Felicite's father is among them, much to her horror and dismay. Valcour, her adopted brother, makes an attempt on Morgan's life, seemingly in revenge. Morgan thinks Felicite is complicit and was making eyes to set up him, chases her down to her home, and rapes her in her bedroom. He quickly realizes that she was innocent, but he's a cold sum'bitch and makes her his forced mistress in exchange for her father's life. All of her friends deliver to her the cut direct and she finds herself miserable and isolated from her former peers, and ends up coming down with a reluctant case of the Stockholms. But she's not a total doormat, and when her father dies mysteriously and it seems like Morgan might be involved, she flees with Valcour to Tortuga.

Spoiler: It turns out her adopted brother is a mega-creeper with a spanking fetish, and being marooned on a pirate ship with a whole bunch of rapey pirates isn't a good place to be in. This is honestly one of the best parts of the book in my opinion, because of (what I'm assuming to be true) the wealth of nautical terms, the descriptions of the islands, and the intricate hierarchy of the ship and its workings that keep everything running like a clock. Spoiler: Morgan will not be thwarted by rapey brothers and follows them via ship, which culminates in a whipping and a duel.

Valcour is an amazing villain, easily one of the best I've come across in one of Blake's books, but as another reviewer pointed out - he just won't die! It takes an act of god to bring him down at the end because the hero and heroine keep letting him slip through their grasp. I do like this heroine though - unlike the heroine in GOLDEN FANCY, whose bravest act is defending herself with a fork, this heroine skewers the bad guy with a sword and tries to get in a shot with a pistol for good measure. She also gets into a sword fight with the OW when the OW challenges her honor. #LadyDuel

There was so much I enjoyed about this book: the rich history, the icy hero, the great fight scenes, the heroine who gave as good as she got (like Ginny, in SWEET SAVAGE LOVE), and the villain. Plot-wise and hero-wise, it's very similar to NOTORIOUS ANGEL, which I liked slightly better than this one, but if you enjoyed NOTORIOUS, it's highly likely you'll embrace (you see what I did there) this book, as well. Blake is very consistent in writing what she's best at, and I really appreciate that.

My only complaint, as usual, is that this was just a bit longer than it needed to be.