Slugfest: Inside the Epic, 50-year Battle between Marvel and DC by Reed Tucker 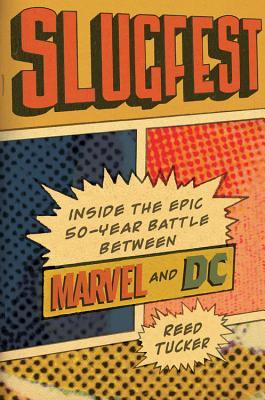 There's a ton of comic book nonfiction coming out this year, and with all the superhero movies pouring through theaters, it's no small wonder. I actually just read and reviewed an ARC of Stan Lee's biography, written by Bob Batchelor, and even though it comes across as pretty fan-boyish, it definitely delves into the infamous Marvel vs. DC wars and touches upon some of the pettiness and poor decision-making that resulted from this. Reed Tucker, however, goes into way more detail, like the Crisis on Infinite Earths vs. Secret Wars launches, and the "Fuck Marvel" incident. Tucker definitely tries his best to remain impartial, and really shows the relationship between Marvel and DC to be something between an older brother/younger brother-type rivalry to something like two arch-nemeses in a comic book for whom the constant battle serves as the answer to that existential question: "what is my purpose?"

DC is unquestionably the bigger brother in this story, since Marvel was created much later. Tucker chronicles their inception and growth and how many artists and creators ping-ponged between Marvel and DC, depending on who was giving out more pay and/or creative control at the time. Tucker takes us through the silver age, the bronze age, the crash in the 80s, and the box office boom of the 21st century with superheroes emerging in a new silver age: that of the silver screen, with blockbuster hits like The Avengers and Wonder Woman (which isn't mentioned in this book, which is ironic because Tucker was talking about how Dark Knight was the last really good DC movie, with both Suicide Squad and Batman vs. Superman being major disappointments - Wonder Woman was the next big hit that DC desperately needed).

I really enjoyed this book. I mean, obviously. I don't read a lot of comic books, but I enjoy most of the ones that I can get my hands on and I like watching super hero movies. Like many comic book commenters, Tucker takes cheap shots at Halle Barry's Catwoman and, of course, Batman & Robin - which, okay, I get it, but I actually like that movie and I've probably re-watched it more than Dark Knight OR Dark Knight Rises, which I find too dark and too disturbing. Batman & Robin is pure fun and mirrors the cheesiness of the animated series, which I adored growing up in the 90s (and still watch, to this day, courtesy of a DVD collection). Personally, I think DC's biggest mistake was Superman 64. Apart from disagreements over which was the better - or worse - adaption of the franchise, I loved learning so many new facts and trivia - like how the Men in Black movie was based off an indie black and white comic, or how direct distribution saved comics at a time when sales weren't doing so well, or that Stan Lee - "face" man of Marvel - at one point worked for DC(!).

If you enjoy comic book history and trivia, this will be a good addition to your knowledge banks. It's well-written, gossipy fun, and manages to make you appreciate the things that make comic books so wonderful while also revealing some of the flaws of creators and creations alike... and somehow, that touch of reality actually makes the comic books and writers even more whimsical. I guess it's kind of like Stan Lee's editorials, back when he wrote for Marvel: Tucker makes you feel like you're part of the comic book "Mean Girls" gang, and that taste of the geeky elite is totally worth it.