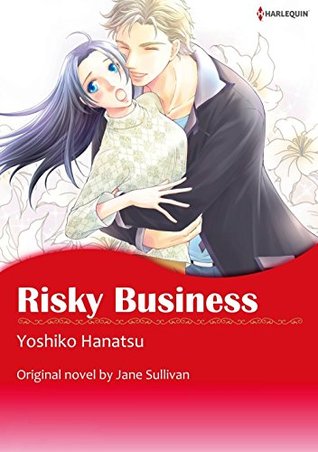 Did you know that Harlequin manga is a thing? I didn't either, until fairly recently. The premise seems to be, take vintage "Harlequin Presents" novels that everyone has forgotten about and then regurgitate them in traditional manga form. Laughable? Yes. Fun as all get-out? OH YES. I've been collecting them whenever they go on sale because they are the Crazy Romance Lady™ version of Pokemon Cards:

I MUST READ THEM ALL.

RISKY BUSINESS is pretty mediocre in terms of storyline, with the usual amount of suspend-your-disbelief ridiculousness (sorry, Tom Cruise does not make an appearance). Rachel and Jack had a steamy one night stand and then she vanished from his life. When he spots her one day, he impulsively chases her down - to her office(!) - and finds a picture of them together on her desk. As it turns out, she recently got hired as an architect in a "family friendly" firm and told them all that she was married - to Jack - to get the job.

Her coworkers think that Jack bursting into the office is a sign of a joyful reunion between husband and wife and not what it actually is: a psychotic clash between two compulsive liars. They get invited to go on a retreat together in the mountains, where Jack proceeds to taunt and humiliate her (not in a mean alphahole way, but still pretty rude). Rachel rebuffs him at every turn and is adamant that that one night shall not be repeated... despite her obvious attraction to him. As they continue to play out the charade, they learn a lot about each other, and about some of the truths behind the lies.

I thought this book was okay. If it was a story, I'd probably give it a 2, but I liked the art. This is not as nice or as detailed as some of the other Harlequin manga I have read - the best so far is probably Naomi Watanabe's WHISPER - and that often unadorned style, especially around the eyes - almost felt like something you would see on a higher-end shounen manga. You really have to suspend your disbelief a lot, but I liked the banter between the characters, and Jack - despite his slight stalkerishness in the beginning - is a pretty decent hero. There are even some steamy scenes in here for those of you who are into that sort of thing, wink wink, nudge nudge.