Pink Think: Becoming a Woman in Many Uneasy Lessons by Lynn Peril 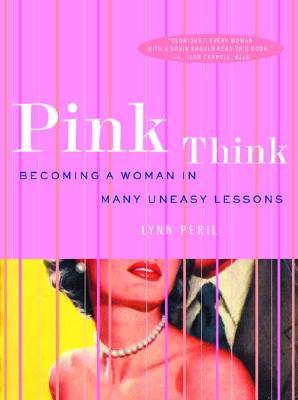 Speaking as a third-wave feminist, I will say that it's tough trying to argue your views to people who consider this a "post-sexism" era, and attempt to use that as a rationalization and a defense for some very sexist, misogynistic thinking: basically, "shut up, you've won the right to free speech and equality - now flash your tits or get back to the kitchen." Even if not phrased in such explicit terms, the mindset among these "post-sexism" individuals seems to suggest that feminists have "won" and are now demanding more than their "fair share." I said this in my review of MEN EXPLAIN THINGS TO ME, and I'll say it again now: that third-wave feminism isn't just some over-entitled mindset where women are demanding special treatment - unless you believe that equal treatment is "special" treatment. There is still a wage gap, and that wage gap is particularly bad when it comes to women of color. Women in many states still do not have access to safe abortion, either because of state-imposed limits or because it isn't covered by an insurer. Women are still hyper-sexualized in a way that men are not, in a number of venues ranging from the religious to commercial, and still largely blamed for their own assaults. Yes, things are better than they were 100, 50, 20, or even 10 years ago - but it isn't perfect, and we aren't even close to being done.

But back to the book: I love nonfiction and I love feminism, so picking up PINK THINK was a no-brainer. I'll read any feminist title I can get my hands on, because I love being informed and getting access to the popular and unpopular ideas of the movement. PINK THINK focuses on the indoctrination of girls into womanhood via pop culture and cultural norms, focusing particularly on the 1940s-1970s, when mass-production created a number of affordable products for the growing middle class but before Title IX and the Civil Rights era came into play. The result? Some very questionable products and advice that make you wonder what the hell the last generation was thinking. Obviously, as a feminist and pop culture aficionado, I thought this was bomb.

Orgasm (female): "No more essential for conception than a mink coat or a lipstick."

These definitions are so horrible that they're almost comical - until you remember that people actually thought that way, and that some to this day still do. Peril covers a number of other topics, such as toys shaped like house cleaning products so that little girls can be just like mommy; dating advice books for boys that read like some of the pick-up books of today, suggesting to boys that no does not always mean "no" and that they should press ahead as far as they can, sexually, because that means they'll only get further next time; douching with Lysol for feminine freshness (ugh!); and the idea that female sexuality is something undesirable that not only tarnishes a woman's reputation but that should also be suppressed if not being used for procreation and the begetting of offspring as seen in this excerpt from a book by Ann Landers from the 1960s:

My goodness, it's like something out of Handmaid's Tale or Stepford Wives, and I don't think it's a coincidence that both those books were written by people who were alive at a time when these products and ideas were in full rotation. And while things are changing, the damage is still there. Go to any toy department often enough and I guarantee you that you'll hear parents telling their boys, "You can't have that, that's for girls!" or "That's a boy toy, girls don't play with that!" to their girls. I've heard moms and dads scolding their children about wanting to play with everything from Weebles, to Lipsmackers, to Hot Wheels. You still see cooking and cleaning toys marketed to girls, and tool kits and action hero toys being marketed to boys - and rumor has it that at one point, a pole-dancing doll circulated the toy dept. of an unmentioned store, until it was (I imagine) very quickly recalled for an innumerable amount of reasons.

There are a lot of illustrations in this book that are great - I especially loved the pictures of vintage products, particularly the full color ones in the middle (there were not nearly enough). Kind of shocked that bodice rippers, the treatment for "hysteric" women (hint: masturbation machines), and certain fashion ads weren't even mentioned, though! But then, there's so many salient examples of sexist advice and products from these time periods that I'm sure the author was forced to pick and choose, at the risk of compiling a 1,000+ page encyclopedia of "Sexism through the ages." I wish there were more pictures of out-of-touch products, although if you read this book and would like to learn more on the topics presented in here, I can recommend three videos to you right off the bat: Vox's How did pink become a girly color?, Buzzfeed's Women Review Sexist Vintage Ads, and anything by Sarah Haskins via her "Target Women" series, for more modern examples.