At the Argentinean Billionaire's Bidding by Tomomi Yamashita 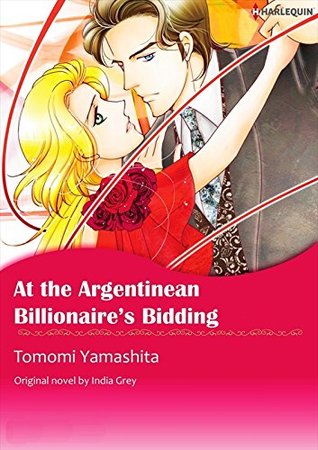 This book was a bit of a disappointment, and is probably my least favorite of the HQ manga I've read. Tamsin is a member of the nobility, and the daughter of a man who owns a rugby team. When she was a teenager, she had a crush on the star rugby player but due to a misunderstanding following her declaration, her father kicked him off the team and he (the rugby player, Alejandro) never forgave her. Now she's a successful fashion designer and is charged with making the new team uniforms - and he is a businessman who works for the other team.

Usually, if the title of the romance novel could double as a short synopsis of the book, it means that you're probably going to be dealing with an uber alpha hero and this book is no exception. Alejandro is one of those really mean heroes who seems to delight in treating the heroine like garbage, all in the name of "revenge." It was over something so petty, too. Plus, he refers to the heroine as a "virgin flower" 3-4 times over the course of this book, and it's like, dude, stahp.

I thought Tamsin was an interesting heroine, but she wasn't really that well fleshed out. She wasn't irritating or anything, though. Just a dull, standard nice-girl prototype. Honestly, it's the story (lacking) and the hero (mean) where this book loses its stars. I'm sad that I didn't like the story more because the art is completely gorgeous, and utterly wasted on this lackluster effort.

I bought this for 99-cents, so I don't feel like I was ripped off, but I wouldn't pay any more than that for it. There are better HQ manga to start with and this, sadly, isn't one of them. I'll have to make a note to avoid any other India Grey adaptations; something about her stories just feels "off."