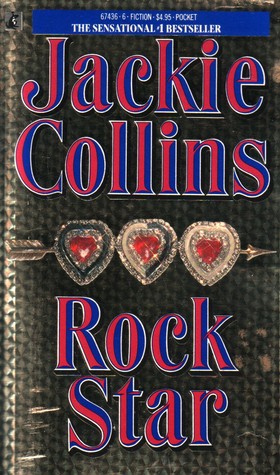 I needed to read a "rock star" romance for this romance reading challenge I'm doing, and I figured what better way of accomplishing that than to revisit the first vintage novel I ever read? Jackie Collins's ROCK STAR. You know you're getting into something good from the very moment you crack open the cover and see the author's full cover 80s glamor shot, looking like the world's greatest bad-ass with teased hair and a denim jean jacket. RIP, Jackie Collins.

I read ROCK STAR for the first time almost ten years ago and it holds up pretty well. This book is an epic that is nearly 500 pages long that takes place mostly in the late 70s, early 80s. It is about three rock stars. There's Rafaella, who is a quarter black, a quarter French, a quarter English, a quarter American, and an amazing lounge singer. Born to wealth, she suffered many tragedies, including the death of her father, and rose to fame after having her heart broken for the second time. There's Bobby Mondella, a black soul singer, who started out life overweight and impoverished and later became a best-seller and international sex symbol, only to lose his sight in a terrible accident. Lastly, there's Kris Phoenix, the ultimate stereotype of the 80s rocker, cast in the mold of Mick Jagger and Bruce Springsteen. He sleeps around, and talks like a Valley Girl, but he's 100% all about that rock life.

The thing that these three stars have in common is a creepy European dude named Marcus Citroen and his wife, Nova Citroen. Both of them are 100% about that creep life, and have invested mind, body, and soul into these stars for their own personal means. Now, in 1987, all of them are about to come together in a final showdown at the Citroens's benefit concern. Only, things are about to be explosive, because there's this random group of criminals planning a heist to end all heists, too.

ROCK STAR is so over-the-top, so 80s, that it's absolutely amazing. It's the ultimate sleazy adventure. Everyone wears too much makeup. Everyone does cocaine. Everyone's a shallow jerk. The characters play musical beds. The word 'b*tched' is used as an actual dialogue tag. Even the written-out phonetic accents and racial stereotypes are done so unapologetically that it's almost not offensive. Almost. Is this book dated? Oh, God yes. The only thing more dated would be a guy wearing silver parachute pants and a mullet, dancing around in the street with a giant boombox to "In Your Eyes" by Peter Gabriel while his Chrysler idles in the street. On the other hand, it's pure fun, and written just smartly enough that you won't be filled with morning-after regret the next day.

I RECOMMEND THIS BOOK TO ALL, OBVIOUSLY.