The Sea King by Jolie Mathis 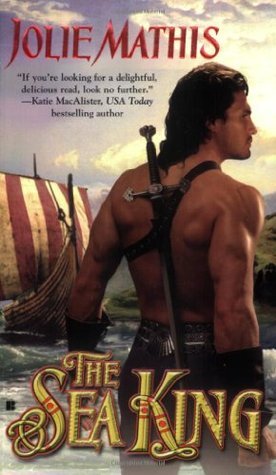 I've been on a bit of a viking kick lately, so I was excited to pick up SEA KING. It's the only book Jolie Mathis ever wrote, which makes me sad, because it's not bad for a debut but it also suffers some of the usual beginners' jitters, and I think it's a shame that she didn't keep up with the craft because I would have loved to read some of her later books after she'd had time to improve. But some of us only have one story in us, so if she just wanted to write the one and check the list, that's fair, too.

SEA KING is about Isabel, a Saxon princess, and Kol, a Norse warrior. When her horse throws her as a young woman, she falls into a river and nearly drowns, but the young viking saves her. As it turns out, he's on her way to the hall-- where he is promptly treated like a prisoner, and tortured. Isabel frees him, and when they reunite years later, she regrets doing so, because what does he do, but immediately sack her village, thus causing everyone to brand herself as a traitoress. Plus, her half-brother, Ranulf, has told her that the child she mysteriously bore was the result of him raping her as she slept, so she thinks he's an ignoble, rapey bastard.

As the story goes on, it starts to become clear that this might not be the case. One, because honor would have prevented it. Two, because he didn't really have time. And three, because due to a curse from his witch-mother, he believes himself to be impotent. Also, several people have cast their rapey eye on Isabel, including, maybe, her own brother. So with the paternity of her son up in dispute, and fights breaking out all over the kingdom, SEA KING starts to look and feel a lot like a medieval episode of Jerry Springer with multiple people screaming, "YOU ARE NOT THE FATHER!"

Initially, I liked this book a lot, but it quickly started to feel like a pale imitation of a viking book I enjoyed a lot more (Caitlin Crews's THE VIKING'S RUNAWAY CONCUBINE). The FLOWERS IN THE ATTIC vibe and court intrigues kept me reading, but the twist with Godric (Isabel's son)'s real parentage was weird. I hated most of the characters in this book, too, including Isabel. I felt so bad for her, but boy, was she thick. After a while, I just wanted to shake her for being such a wishy-washy character. Also, the surprise "hey, guess you're not impotent after all!" ending felt vaguely ableist? I was kind of hoping that the hero was unable to have children, because that's just so rare to see. But ofc, it was just a case of right dick, right person. Isn't that always how it goes in these romances? *eye roll*

I'd recommend this book for people who like vikings or are stuck on planes, preferably both, but that's a pretty small Venn diagram.