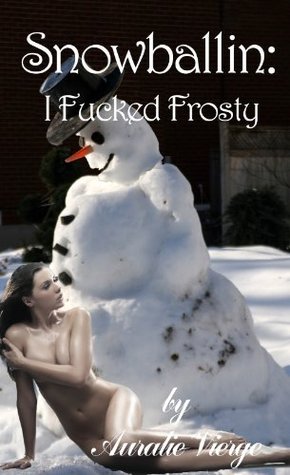 Every week, I condescend to read one messed up work of erotica or romance recommended to me by you, the readers. This week, as an out-of-seasonal theme clearly designed to mock me in the middle of this triple-digit California heat wave, I am reading SNOWBALLIN: I FUCKED FROSTY, one of the early members of the wtferotica trend.

First of all, WHERE is all the dashing through the snow in a one-horned open lay? For 70% of the book, the heroine is just banging her Chad boyfriend after they build a snowman. It takes nearly until the end of the "book" before the heroine places the magical fedora on top of the snowman's head and brings his Oreo-eyed self to life.

But not before her BF totally leaves her orgasm in the drafts. #rude

I actually found SNOWBALLIN to be pretty boring. There were a few great WTF lines, like the heroine fretting about the snowdong getting stuck inside her like that kid's tongue did to that flag pole in A Christmas Story, or talk about riding his "South Pole." And then there's the line about how "Eskimos" (her word) have hundreds of words for snow, but the only two she needs are "fuck" and "yeah." But apart from that, dullsville, population: me.

I give props to this author for being one of the earlier hangers-on to this trend, and I don't think I've ever seen a Frosty the Snowman erotica before this one, but 11/10 would not recommend.