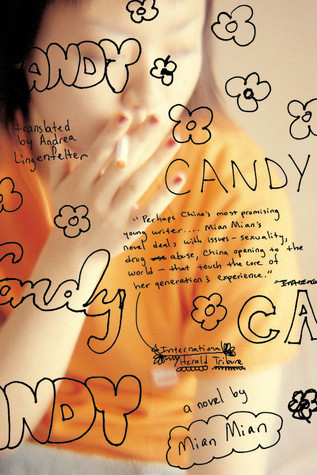 Look, I am both very predictable and very contrary, okay? Tell me a book is banned and I'm going to go out and get it, because I'm going to figure that it was so good it scared the heck out of people who would like to oppress intellectual discourse and radical thought. When I found out that CANDY was banned in the author's native China for its frank and unvarnished approach to sex, drugs, and rock culture, I thought for about half a second before slamming the "to read" button. When I happened to remember it years later, I saw that it was on sale in the Kindle store. Serendipity, obviously! I slammed that "buy" button.

Reading this book made me think of Western Gen Y cultural touchstones, like Elizabeth Wurtzel's PROZAC NATION, Susanna Kaysen's GIRL, INTERRUPTED, and the movie, Reality Bites. Basically, the counter culture movement with messy, neurodivergent women who didn't want to fit into society's mold, who were both inert and catalystic, who sought alternative realities through passive observations and escapism through drugs. CANDY was just as edgy, and it definitely delivered on all the provocative material it was banned for, including two things not mentioned in the blurb: prostitution and the AIDS scare.

My favorite portions of this book were the beginning, when the heroine is a messy teenager talking about her coming of age in the changing landscape of China as it recovers economically from the Cultural Revolution and starts to become the global superpower it is today. The middle section that provides intimate details of the heroine's prostitute friends and acquaintances was also really fascinating it to me. It reminded me a little of Marie Rutkoski's REAL EASY, where some of her stripper characters had various reasons for getting into the business and loved or hated it to varying degrees.

I do think this book felt a bit disjointed and sloppy. Maybe some of that was the translation, but sometimes the writing felt too awkward. I also felt like the ending started to get really depressing (although not as depressing as it could have been). But I feel like that's also typical for these types of stories, where people who are neurodivergent or suffering from mental health disorders might be self-medicating and bad things can happen from overdose or from the results of risky behavior. And it wasn't a tear-jerker or anything like that. It just featured a cast of really unlikable and messy people, some of whom sort of turned out all right, and others met with less than satisfactory ends.

I think it's worth the read just to see what the late 80s/early 90s were like from the perspective of China's then-youth and counter-culture scene. Often, when Asian countries are represented in media, they tend to be portrayed as a monolith, with the culture there being very homogeneous. This shows that this is very much not true and I think that's one of the things I liked most about it (apart from it being so different from other books I have read). Books with similar but slightly less edgy subject matter that I enjoyed slightly more about China's youth scenes are Wei Hui's SHANGHAI BABY and Fan Wu's FEBRUARY FLOWERS (a favorite of mine, actually).