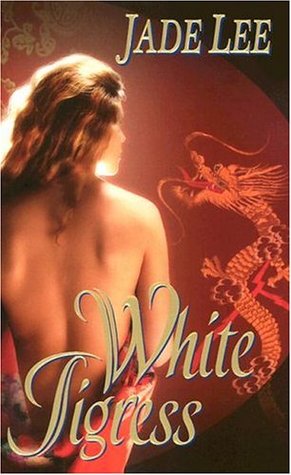 WHITE TIGRESS has been on my to-read list for ages for several reasons. First, it is historical fiction set in a non-European country (China) where one of the main characters (the hero) is not white (he's Chinese). Better yet, the author is half-Chinese (from Shanghai) where this book is set, so it's also #ownvoices-- and it's an #ownvoices book from a time period when such books were not really marketed all that well and therefore not championed as they should have been.

The premise is also pretty interesting, and the first hundred pages or so were good enough that I was convinced I was going to love this book and immediately splurged on the whole series on Kindle. The hero, Ru Shan, comes from a wealthy merchant family that is surrounded by tragedy and ruin. Now the business is failing and he's haunted by a murder in his past that he must atone for. He's also a mystical Taoist and his mentor says that he has too much yang/fire in his soul and must find a water woman brimming with yin to "milk."

You'll find that the word "milk" is going to be very crucial here. Also, I'm about to drop a ***SPOILER*** the way Skrillex drops the bass, and yes, I just made a Skrillex reference in 2021.

ANYWAY, Lydia is on her way to China to meet her colonizer husband-to-be when she foolishly stops to talk to strangers and ends up with some drugged opium tea. Faster than you can say "oops, didn't mean to" she winds up in a brothel as the exotic flavor of the month, chained to a bed. As one does. Ru Shan stops by and his mentor says, "That's the one, just look at those tits, they're full of yin." And Ru Shan is like, "She's white, tho. Gross." And mentor is like, "BUT TITS." And Ru Shan is like, "Good point. I'LL TAKE HER." And just like that, Lydia is a slave. Hooray.

This is when the book starts to get really weird. It's almost like lactation erotica, except instead of pregnancy milk, it's magic boob spirit juice. In the book it's called "woman water" and "yin milk" and several other things. Ru Shan does these "breast exercises" to release the yin (e.g. boob spirit juice), because according to his Taoist doctrines, boobs = Yin Grand Central Station. He also gives her a dildo shaped like a dragon to do more exercises in her "cinnabar cave." The dragon is symbolic; his status in the Taoist group he's in is jade dragon and that is also-- literally-- what he calls his dick. It's where he keeps his yang. My man is stuffed so full of yang, you can see the gleam of it in his eyes.

I don't know if this is apocryphal or if this is actually similar to the tantric sex practices that are a (slim, very slim) element of Hindu and some Buddhist practices, but it was very strange. And very silly-- to me. I guess I wasn't really sure what I was getting into with this book. I was expecting a captivity romance and instead I got something very, very similar to lactation erotica. Poh-tay-toh, poh-tah-toh.

Anyway, in addition to all this weird sex stuff... there's also a lot of weird other stuff. Like what's really going on with Lydia's white fiance (hint: colonizer bullshit). And what the secret is that Ru Shan must atone for (hint: toxic traditional bullshit). Also, EVERYONE is racist. I don't think I've ever seen the words "ghost people" hurled around so many times in a book. Which, to be fair, probably was hurled around a lot in Victorian times because of all the resentment about said colonizer bullshit. And Lydia definitely refers to Chinese people as barbarians and Chinese rats, so everyone is a dick!! YAY

Is this offensive? IDK. Probably. I feel like the author wasn't really glamorizing any of this and both of the characters realize that racism makes them huge dicks at the end, while also having a serious discussion about the responsibility of bringing a biracial child into a world that is filled with racist dicks. Which, considering when this book was published (2005), feels pretty progressive. Especially since there really weren't a lot of books around talking about stuff like this at the time. Plus, how seriously can you take a book that LITERALLY ends with the hero and heroine fucking each other to heaven? They. Actually. Fuck. To. Heaven. And then they're like "oh hi god." WHAT.

Until this moment, the weirdest romance novel I have ever read was Robin Schone's AWAKEN, MY LOVE, but I think this book might win that race. It's pretty close, though. Maybe you can read them both and tell me what you decide. They're both pretty cheap on Kindle.