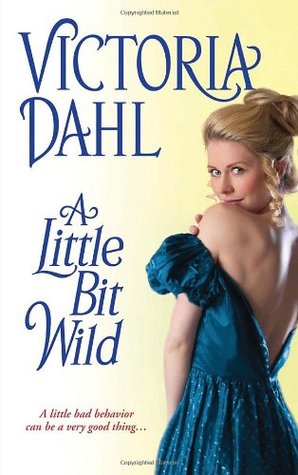 At first I was really into this book because it literally opens with the heroine compromising herself "just for fun." Which-- is a twist. Unfortunately, it becomes an extra twisty twist when it turns out her bed partner has only compromised her to force her into marriage and grab hold of her fortune (cue mustache twirling mua-ha-ha here).

Obviously, the heroine, Marissa, is not happy and immediately starts insulting his manhood (in every sense). Which is HILARIOUS. But her brothers are not amused and say she has to marry. And since she won't marry Mr. Mua-ha-ha, that leaves very few options.

Jude is the recognized but illegitimate son of a duke. He's also a groundskeeper, I think? Anyway, he likes Marissa and since his mother was a lady of the night, he kind of has a soft spot for woman who compromise themselves (a little Freudian but ok). Unlike some reviewers, I actually thought it was interesting that the author was playing up the fact that he wasn't super attractive, and maybe that could have gone somewhere if he didn't come across as such a Nice Guy. And not the good kind, either. The kind you find on Reddit.

I just couldn't stand this smarmy, patronizing oaf. And this story lacked the tension and atmosphere of Dahl's previous historicals that I adore. There was always *something* missing in some of her books for me but I usually enjoyed them despite that. With A LITTLE BIT WILD, I found my eyes flicking between the pages read and my watch. You'd be better off reading her Somerhart trilogy.