The Big, Bad Book of Botany: The World's Most Fascinating Flora by Michael Largo 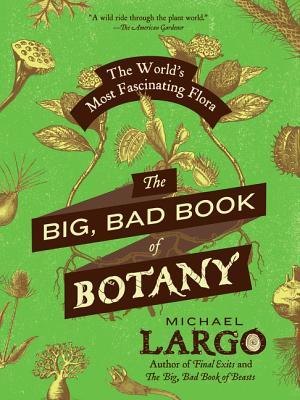 I bought this on impulse because it was on sale in the Kindle store and whenever I see something having to do with SCIENCE, I immediately flash back to grade school, when my teacher would roll out the AV equipment and I knew that it was going to be a Good Day because we were about to watch a video. About SCIENCE. Because science rules.

THE BIG, BAD BOOK OF BOTANY is a collection of plant facts about various plants, organized in alphabetical order. I'm not really sure how the plants in here made the cut-- maybe they were just ones the author thought were particularly nifty?-- but they were all pretty interesting. Like, I didn't know there was such a thing as cyanide grass or that avocados are considered berries(??) or that there are extant trees that are still alive that date back to pre-Bronze age. CAN YOU IMAGINE BEING 5,000 YEARS OLD? Only two things live that long: vampires and trees. (Maybe that's why wood kills vampires?? They're rivals.)

I see that a lot of botanists rage-quit this book because the author got some minor details wrong. I'm guessing that this is a layperson's book for people who are just looking for trivia to tell their friends and family. The only thing I really picked out in this book that made me unhappy was the tobacco section when the author was like Columbus discovered tobacco! No, Columbus columbused tobacco from Native people who were using that tobacco way before that jerk swaggered his way into America.

Overall, though, this was fun and informative and I'm keeping it on hand for reference because it had so many interesting facts that I think I might like to revisit another time.