How to Be Fine: What We Learned from Living by the Rules of 50 Self-Help Books by Jolenta Greenberg 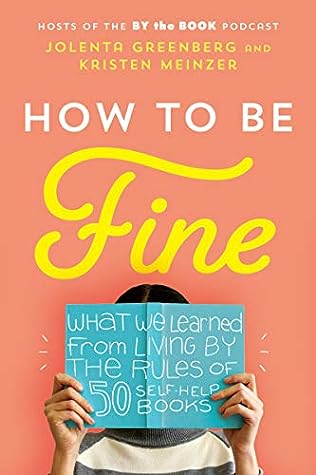 My thoughts about HOW TO BE FINE ended up being really mixed, partially because there was a bit of a divide between what I thought this book was going to be about and what this book was actually about, and partially because of my own (negative) feelings about self-help books in general due to my own personal feelings on the subject matter (which I will elaborate on and clarify later in the review).

I thought this book was going to be a gentle satire and summation of top self-help books in the field with social commentary, kind of like what Gabrielle Moss's PAPERBACK CRUSH did for YA. This book is not that. Apparently, these authors have a podcast called "By the Book" where they read and digest self-help books and discuss what worked, what didn't, and what they wished the books discussed, and this book is basically an extension of that. The book is divided into sections, by topic, where they talk about various overlapping themes presented by the various books they read, and there are three sections divided into their blog format: the beginning (what they liked), the middle (what they didn't), and the end (what should be talked about).

I personally don't really like self-help books and there are several reasons for this. First, I have depression, and when you have depression your friends don't like seeing you unhappy and sometimes try to help you in endearing but ineffective ways. One of the ways some of my friends did this in the past was by gifting me self-help books. I have received (unsolicited) books about dating advice, meditation, dealing with depression, and even philosophy. The self-help books were inevitably new age books written from a perspective of privilege by well-adjusted successful people who perhaps once may have been unhappy twenty-year-olds working in dead end jobs and struggling with mental health at some point in their lives, but in the wake of all that fabulous self-help book money seemed like they had lost touch with what it is like to feel as if you have literally no control over anything. "IT'S SO EASY!" they all seem to say. "YOU CAN DO IT TOO. JUST LIKE ME!"

Well, the thing about that, Mr./Ms./Mx. Self-Help Guru, is that if it were so easy to be just like you, then all of us would be self-help gurus. Checkmate.

Second, I am a psychology major, and a lot of the self-help books I have glanced at or paged through seem to enjoy touting their own various brands of pseudo-science. They will parrot folksy wisdom and armchair psychology that has trickled down into the common lexicon without any actual science to back it up. (BuzzFeed wrote a particularly salty article-- for them-- basically accusing Rachel Hollis of doing almost exactly this.) And sometimes, they are wrong. Case in point: self-help books seem to be wildly focused on external, visible measures of success, things like vision boards and journals and carefully curated work spaces, but those things require energy to put together, and, often, physical objects, which unhappy people often lack the energy and sometimes the funds to produce. This is just one example, and I'm sure I could probably write a book of my own about all the things about self-help books that annoy me (guilt and blame) but luckily for me, the authors of HOW TO BE FINE seem to agree with most of these things, so this actually isn't a beef with the book itself.

Looking at the reviews for this book, I actually found a lot of them to be incredibly unhelpful, because half of them seemed to be from fans of the authors' podcast writing to support their favorite creators (which is touching but not all that useful for people who don't watch the podcast), and the other half seemed to be taking issue with the authors' politics (yes, they are liberal, and yes, they dare to point out that a lot of self-help books are written for white, cis-heterosexual people who-- gasp-- come from a certain level of privilege). Again, not useful, and also, way to miss the point about open-mindedness. It actually made me stop and have a think about what the sociodemographic (ha-- told you, social science major) profile of self-help audiences actually look like from a political, ethnic, and religious standpoint.

Personally, I think this book is probably going to be the most helpful to people who are OPEN to using self-help books and would like a sort of litmus test that will help them gauge where they would like to begin. I actually did see one or two titles I might like to read now-- the one about zero waste living sounded fascinating, especially as I am trying to reduce my environmental impact (side note: I'm part of something called the Buy Nothing Project, which encourages members of the community to trade or gift old items to neighbors to keep things from going to overflowing landfills or donation facilities). I also liked the emphasis on mindfulness and self-care, and not just self-care in the vapid, "let's blitz out on the couch while watching The Good Place and wearing a face mask" sense, but in the "living in the moment, treating others the way they want to be treated, practicing sincere apologies and acknowledging your own wrongdoings while also not taking blame for things that aren't your fault" sense, which is definitely a best practice for everyone, in my opinion.

I do think this is a very personal, very emotional book. It seemed like every chapter, the authors ended up crying over something, figuratively but also literally. They also definitely overshare, as others have pointed out, but usually for a point, and they try to make it entertaining or funny. I personally didn't think it ever crossed a line, but I'm pretty hard to shock and have a pretty high tolerance for things like that. There are definite triggers for discussions of abuse and mental health, but it is usually done in a constructive, affirming way.

I liked that the authors had a section devoted to not seeing taking medication as a weakness (especially since this is something that, they claim, a lot of self-help books do imply). I take medication for my psychological well-being and I feel stronger and more like myself because of it, and yes, people (note: not family, luckily, but people I considered friends) did try to make me feel weak for this when I was younger and feeling vulnerable about it, and yes, it hurt and led to me trying to go off the medication as a result. I also liked the section on body positivity, although I do think that some diets can be beneficial as long as they are presented as long-term, lifestyle changes that aren't supposed to burn off the weight quickly, but instead enable you to pursue mindful eating and more beneficial choices when it comes to obtaining the vitamins and nutrients you need. Most diet books don't present food in this way, however, and it can quickly end up being toxic.

So overall, I did like this book. I didn't love it, but I liked what the authors were trying to do and they seemed like really nice people and had good rapport with one another. I also thought that they were trying to do a pretty good thing with this book, which is why it was sad to me to see so many reviews mocking and shaming them for this, but then, this is what a democratic review platform looks like, I guess: you agree with someone's right to say something, even if you think they're a jerk for saying it. (Is that not how the saying goes?) Definitely this is a book aimed more towards enthusiasts than at skeptics, but for what it was, I ended up liking it way more than I thought I would.