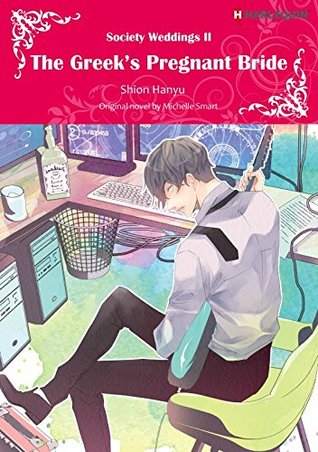 I'm speeding through these Harlequin manga. They're like potato chips-- it's impossible to stop at just one. I know they're the trashiest of trash, but I like them anyway. THE GREEK'S PREGNANT BRIDE is one of those Harlequin novels where the title of the book can also double as the summary. Alessandra has had a crush on billionaire Christian since she was in high school and is deliriously happy when they have a one-night stand. She thinks that the icy playboy will be tickled pink when she tells him she's pregnant, and is surprised when he whips out his daddy issues card and reluctantly agrees to marry her but then tells her that he is unable to feel love.

Shion Hanyu is a fairly prolific mangaka adapter of Harlequin romance novels, and I've read a number of her books at this point. She has more of a shoujo style than some artists, with everything very rounded, with thick lines, and lots of sparkles and light, like you'd get from the dodge tool. I'm not mad at her art style but it's definitely a look, and one that might not appeal universally to everyone.

The story was OK. When I rate Harlequin manga, I take art, story, and readability all into account. As I mentioned before, I do like Hanyu's art. She's not my favorite, but she does a good job and her style is consistent and doesn't do anything too trippy. The story is also OK, but got on my nerves. I don't really like pregnancy as an excuse for marriage, because two people getting together who aren't in love with each other trying to make it work for the sake of a child seems like a recipe for disaster. I'm also not a fan of the "jerk dude with mommy/daddy issues" trope. Either grow up and put your big boy pants on, or don't have relationships with women. Women don't want to deal with that trash.

THE GREEK'S PREGNANT BRIDE falls snugly in the middle of my Harlequin manga rating system. It's inoffensive and entertains, but has too many annoying things going on in the story to really get me invested in the characters' love story. Shion Hanyu seems to go for stories with really rich alpha guys who have toxic family dynamics, though, so that might be something to keep in mind. Some of them do it better than others, and this one was a little bit less so.