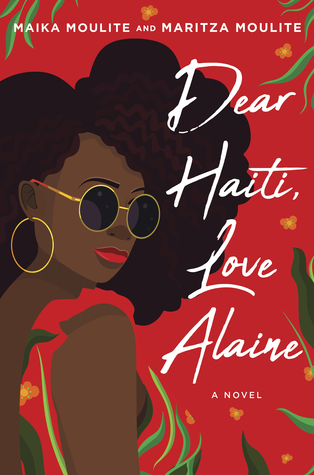 Oh man, you guys. I wanted to love this book. I thought it did some great things, which I'll be talking about shortly, but it also came across as a bit of a disorganized mess. DEAR HAITI, LOVE ALAINE sounded so promising. The heroine, Alaine, goes to a private religious school. She's of Haitian heritage, and her mother is a famous reporter known for her looks and her edge. Everything falls apart when her mother assaults a politician on TV, triggering something called "Slapgate." Naturally, all the ignorant opportunists at her school take this as the perfect occasion for bullying, and when Alaine decides to enact her revenge, her shenanigans result in suspension, and a plane-trip to Haiti to help out her aunt with her nonprofit, as well as relax with her mom, who apparently has Alzheimer's.

I think the biggest problem with this book, for me, is that it doesn't have much of a plot. Alaine gets in trouble and is sent to Haiti to find herself and reprioritize. It actually has a very similar plot to LOVE FROM A TO Z, except that book did a better job tackling chronic/degenerative illness, and the teen romance in it felt not obligatory, but a natural progression of the characters' shared interests and goals. DEAR HAITI, LOVE ALAINE is largely character-driven, but we don't really know much about the other characters beyond what's thrown at us in info-dumps, and the whole family curse thing was weird.

I did like the Haitian rep and how Alaine had natural hair. There's some good commentary buried in here about colonialism and racism, including how donations can actually sometimes hurt the nations they're trying to help (free food is really hard on the income that local farmers make), which might sound counterintuitive at first, but makes sense when you really think about it. I liked Alaine's mom, Celeste, a lot and sympathized with her struggle. I thought it would have been interesting to hear more from her, and wished the book had been written from her perspective. Roselind had such a devastating history but, again, she felt mostly like a vehicle for the whole curse subplot.

For people who like the prankster Meg Cabot-brand of heroines who act out for no reason and embrace the consequences they receive from adults like prizes at a show, you'll probably enjoy DEAR HAITI, LOVE ALAINE. However, if you're looking for something more serious, this book is probably not for you, as it tries a little too hard to be light, given the subject matter. As always, I encourage you to check out the Kindle sample and see for yourself if this book is to your taste.