The Familiars by Stacey Halls 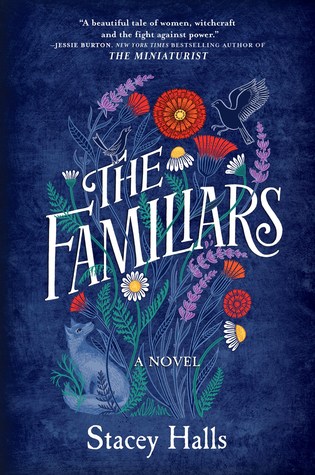 I requested this book because I was in a witchy mood and the concept of feminism and girl power set against the backdrop of the witch trials during the rule of King James appealed to me. In case you didn't know, King James was all about that witch-hunting life. He wrote a book called the Demonology, and Shakespeare actually wrote Macbeth with witches to appeal to his audience (i.e. King James). The witch trials in the United States were terrible, but the 100 or so women killed tops pales in comparison to the hundreds of thousands of women who were murdered in the UK on account of being "witches."

Fleetwood is a seventeen years old, pregnant, and the wife of a lord. Theirs was a marriage of convenience (she has the money), and he basically treats her like chattel, condescending to her and talking to her the way one would a child or misbehaving dog. So she's understandably shocked and outraged when she finds a hidden message from a physician advising against pregnancy as the next will be her last. Especially since he doesn't seem concerned about her health at all, despite 2 miscarriages.

Wanting to live, and wanting their child to live, Fleetwood enlists the help of a mysterious woman she finds gathering herbs on their property one day. This woman is Alice, a midwife and wise woman, who has gained her knowledge from the maternal line. Alice's knowledge of herbal remedies actually ends up helping Fleetwood and she finds herself feeling better than she has in months. All of that changes, however, when a friend of her husband, Roger, starts arresting and imprisoning women to await trial for execution. He's heard about King James's penchant for witch-hunting, and figures the murder of the innocent will be a fine feather in his cap when it comes to his own ambitions.

THE FAMILIARS is a very frustrating book because on the one hand, it doesn't fail to highlight how little respect women had back in the day, and how showing any sort of knowledge or ambition as a woman could quickly lead to suspicion and fear. On the other hand, it's a really great story of women bonding together and using what limited power they had to accomplish great things-- sometimes at the expense of the status quo. The writing style and message kind of reminded me of Margaret Atwood, so I think if you're a fan of Atwood and pro-feminist historical fiction, you'll enjoy this book.