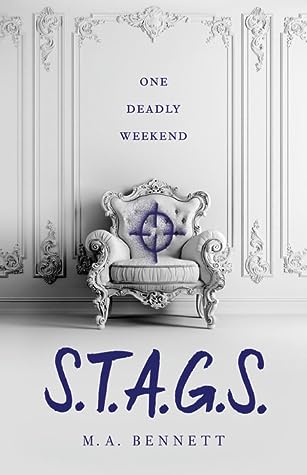 S.T.A.G.S. is the type of book that you remember as being better than it actually was because the premise is so good that you want to forgive it for any tactical errors. It was a strange creature, a blend of cheesy horror cast in the vein of the old Point Horror novels I used to devour as a preteen, but also hauntingly Gothic with passages so dramatic that I reread them a second time.

I've been wanting to read S.T.A.G.S. ever since I heard it was about a deadly party. I'm a sucker for books about deadly parties, and Point Horror had a lot of them, with titles like HALLOWEEN PARTY, THE INVITATION, and SKI WEEKEND, often with letters written in cartoonishly dripping blood. I love them so much, I wrote a deadly party book of my own that ballooned into a crazy OTT wtfest. Deadly parties, man. I can't get enough.

Greer is an outcast at her snobby private school, in which she is a scholarship student. She goes about her days snarking about the privileged Elite and their creme de la creme, "the Medievals." The Medievals are the lords and ladies of their snub-nose courtiers; all of them are the descendants of Somebody Important and they eschew modern technologies, preferring the times of droit du seigneur and divine right, when the peasants could be fucked by the upper-class - in more ways than one - and having a title basically meant that you were a step removed from god; they basically think that the Medieval age was the best age; hence their name. Charming.

As much as Greer hates these little shits, she is delighted when she receives an invitation from their leader, Henry, for a weekend of "huntin' shootin' fishin'." Maybe they weren't so bad after all, she thinks, foolishly, if they're willing to accept her into their ranks. But when she arrives at Henry's sprawling manor, deep in the heart of the woods, she learns that the other kids invited aren't exactly prime material. They've also invited a distastefully nouveau riche girl named Chanel and an Indian boy named Shafeen who they've been viciously bullying all year. Then the accidents start happening and the story takes a sinister turn as Greer discovers just how much the Medievals relish power.

The book's blurb compares S.T.A.G.S. to PRETTY LITTLE LIARS and THE SECRET HISTORY, but I've read both of those and this book is nothing like either. If anything, it's basically a modern retelling of THE MOST DANGEROUS GAME. Maybe they didn't want to call it that because of the spoilers (although that teaser on the cover and the blurb on the back are far more spoiler-ish), or because they feared nobody would know what THE MOST DANGEROUS GAME was (they made me read it in high school, and it was one of the few forced-readings I actually didn't mind).

Had this been a more straightforward story, I think I would have liked it more, but it was often silly. Greer keeps comparing critical narrative scenes to movies, which feels lazy. Rather than saying that this scene reminded you of X movie or Y movie, I would rather you just describe it to me. It kept jerking me out of the narrative and quickly became annoying. There were also some attempts to make this book seem "fresh" by name-dropping brands, but that is also a mistake because it dates the book. Quick example: the author references iTunes, which was killed by Apple just a month or two ago. The last act of the book also becomes a little shark-jumpy. It's hard to write about secret societies without sounding like a conspiracy theorist from The History Channel and this book doesn't succeed.

Overall, though, this was a fun read. I read it on several bus trips throughout Portugal and it passed the time well. I see that the author is planning a sequel called D.O.G.S. and I imagine I'll probably be reading that also, since I'm a sucker for stories about deadly parties and psychotic children. Hopefully it will be even better than this one, although if it's more crazy cheese, I won't mind.