The Wyndham Legacy by Catherine Coulter 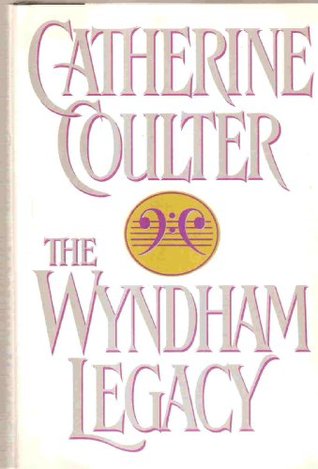 OMG, it's been forever since I actually sat down and reviewed one of these WTF!vintage novels. Given the choice between Johanna Lindsey and Catherine Coulter, I'd go with Catherine Coulter every time. My only beef with her is that she's apparently been censoring - read: rewriting - some of her older works, and apparently taking out the bodice-rippery elements. I get why she might want to do this, but it's a major bummer for readers like me who enjoy bodice rippers in spite of (or because of) their less savory, un-PC elements. So if you're going to read Catherine Coulter for the full bodice ripper ~experience~, finding a vintage paperback or hardback is probably going to be your best bet.

I picked up my ~original~ old skool copy at a thrift store and it did not disappoint. Josephina Cochrane is a bastard, which she finds out after hearing some of the servants gossiping about her, and being a ballsy sort of wench, she actually confronts her father's wife to figure out what it means, because she knows that since her father's wife hates her, she won't hold back the truth. And take her to Truth City she does, gleefully informing Josephina that bastard means that her mother's a husband-stealing whore.

Josephina is pure composure and has all the chill, which has led to people calling her Duchess - especially her cousin, Marcus, who finds himself creepily attracted to her despite the fact that he is an older teenager and she is scarcely adolescent. Ew. Flash forward years later and Duchess finds out that her father later married her mother (after the bad wife died) to legitimize her birth, only both of them had the misfortune to die without telling her first. She finds out from his lawyer after the fact, although her father has left a curious addendum to his will: he's cut out Marcus, the original heir, and given everything to her - with the proviso that she marry Marcus. If not, she gets 50,000 pounds (still a lot of money) and Marcus gets an allowance that is livable but by no means luxurious.

The plot is a whirlwind of action and drama. There's a secret inheritance hidden Scooby Doo style, according to legend. There's attempted murder and betrayal. Josephina drugs Marcus to trick him into marrying her, because she wants that money. Marcus repays her in kind by taking her by force and then mocking her that he's never going to get her pregnant. Josephina goes to Marcus's mistress and they have a friendly chat that goes in a direction I completely did not anticipate. There's a bitchy cousin who says terrible things under her breath and then lies through her teeth about it. There's servants with heirs who could be extras from a Shakespeare comedy of errors. And oh, probably about half a dozen things that I forgot - oh, yes, when Marcus acts truly dickish, Josephina starts beating him first with a whip and then with a bridle, and he's completely shocked off his ass. I know violence is awful, but usually in books like these, the heroine ends up brutalized, so it was refreshing to see a genuine spitfire who reacted to this misogynistic abuse with anger and outrage.

If you're a fan of WTF!romances and especially WTF!romances with enemies-to-lovers, you should pick up THE WYNDHAM LEGACY. It's a little too slow-paced for my liking, which is why it gets three stars instead of four, but it was dead fun, and I really enjoyed the parts that I did like.