The Queen of the Night by Alexander Chee 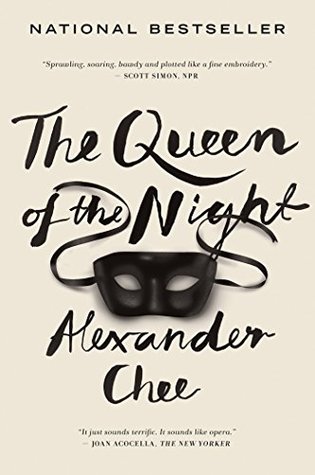 There's an author named "Jennifer Wilde" who wrote some of the trashiest, longest-winded bodice rippers I've ever encountered, always both lewd and boring, with heroines who go through hell and back and yet are somehow remarkably detached on an emotional level from anything happening to them, whether it's the death of a loved one or brutal rape at the hands of a captor. The stories are sometimes interesting, but virtually all of the voices of all of this author's heroines are interchangeable, because the only thing they lack more than agency is any kind of personality.

Jennifer Wilde is actually a man named T.E. Huff, and Jennifer Wilde is his bodice ripper pen name. He also had a gothic romance pen name, "Edwina Marlow." I've read two of his books recently, ONCE MORE, MIRANDA and ANGEL IN SCARLET, which were rags to riches tales similar to THE QUEEN OF THE NIGHT. Also like QUEEN OF THE NIGHT, both of these books were much longer than they needed to be and read as if they were written by someone who had never actually sat down and listened to a women regale the stories of her life before. I know how that sounds, and I'm sure Chee has talked to women, but man, the heroine of this book was bland AF and didn't seem to have any emotions at all. I've seen mirrors that were deeper than Lilliet Berne. And the book is written from her POV, so there is no escaping it.

I bring up Jennifer Wilde because that author is a prime example of a male author who has a good idea for a story starring a female hero, but who doesn't have the chops to back it up. There is no excuse for failing to make Lilliet Berne interesting. She lost her entire family to sickness, then went to work in a circus, then became a prostitute and then the servant to a noblewoman (or maybe vice-versa, I may be mixing up the order), and then she became the captive lover of an evil man, and then she escaped and became an opera singer-slash-courtesan in her own right. With a colorful tapestry like that at the backstory, I should be scarfing this down like it's "all you can eat" Tuesday at the Bodice Ripper Bistro, and the entree of the day is Rosemary Rogers au gratuitous WTFERY. But this book was BORING. I didn't want to believe the people who were saying that this book was boring and slow - I thought to myself, "Well, maybe they don't appreciate a book that takes a while to build up its characters." Some people don't. But this was circuitous, with the heroine constantly telling things to us instead of showing them to us (as unemotionally as possible), and by the time I was 25% to the end I basically started skimming heavily and ignoring 85% of what I was reading. Something about a duel and a final showdown and I think someone gets doused in gasoline. I don't even care.

Apparently this book was many years in the making and it is well-researched and has some well-written passages and descriptions. The problem, I think, is that the author fell so in love with his own writing and grandiose ideas that he forgot all about the heroine. How else to explain why she feels like such an afterthought in her own narration? There are Phantom of the Opera vibes! Faust vibes! Memoirs of a Geisha vibes! HOW WAS THIS BAD? She had this terribad life that she was trying to keep secret for all these years - and then one day, someone presents her with a play that mirrors the secrets of her dark past? WHAT. That sounded amazing. How was this not amazing?? What dark and evil magics were afoot to make this so? I don't always agree with Goodreads At Large, but the critics were definitely right about this one: it was a huge disappointment. I barely finished.