The Blackmail Marriage by Earithen 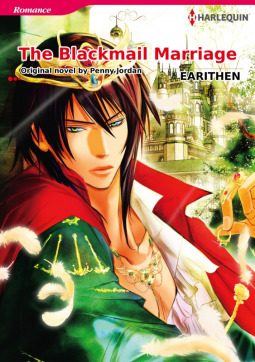 Penny Jordan is one of those classic Harlequin authors, like Charlotte Lamb and Sara Craven, that are basically must-reads if you want to get into the retro "HQ Presents" books. When Netgalley suddenly appeared with a bunch of Harlequin Manga adaptations of popular romances, I was delighted to see that one of them was a Penny Jordan adaptation.

The plot of THE BLACKMAIL MARRIAGE is pretty basic. The heroine is the daughter of a prince's financial advisor in a made-up country called "Santander," which is allegedly between France and Italy and also appears to be the name of a popular bank (I Googled it). The prince has a thing for her and they smoosh, but then this evol countess tells her that the prince is just toying with her while he waits for his marriage with her daughter to go through, and she flounces away in tears.

Obviously, it turns out the evol countess with a stake in this whole marriage thing was - gasp - lying, which the heroine finds out when the daughter breaks it off to marry her handsome (and much lower maintenance) brother instead. When she returns the ring, the prince says, "Cool beans, I'll marry you instead." Cue whirlwind marriage arrangement of prince to his commoner bride, rife with scandal and danger in the form of mafiosi and anti-monarchy activists.

One of the key attractions for me with these books is the art, but I did not like the art in this book. It felt very basic and amateurish, kind of like the popular fanmade doujinshi you sometimes see at anime conventions and on Deviantart. It wasn't bad, but it did not have that classic shoujo style that I normally love about these books, whether I love the story itself or not. In this case, the story was also pretty basic as well, so there wasn't really much of anything to keep me engaged in the book.

Oh my God, and the hero and heroine looked like Cardcaptor Sakura characters or Fire Emblem characters or something. I wanted to lol at the prince's flowy cape (this is a modern story) and his delicate ceremonial tiara. And when they go on their engagement cruise, the heroine is wearing an ornament in her hair that looks just like Sailor Moon's magical compact, and a dress that makes her look like a magical girl in want of a scepter. Oh, and then the prince has an identical half-brother who wears an Assassin's Creedesque hooded cowl to go unnoticed lol. Seems legit. Apparently the artist didn't even do all the work herself as in the end of the book, she says in a note, "Quite often, I get the question, "Is that background a photograph?" No, no. My remarkable assistants meticulously add in the shading details with pens and pencils." Okay, well, I wish she'd credited her assistants in this book, then, especially since she goes on to add, in a vaguely self-congratulatory tone, "These backgrounds are drawn better than the people." Well, credit your assistants, then!