Donald and the Golden Crayon by P. Shauers 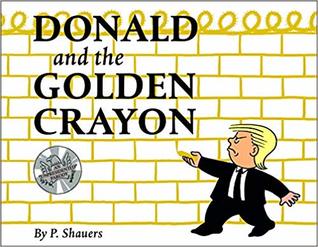 HAROLD AND THE PURPLE CRAYON was one of my favorite children's books growing up, so when I saw a parody version of the book on Netgalley that proposed to be a satirical look at SCROTUS's so-called presidency, I leaped. I mean, look at that cover. It's a fantastic cover, with an official seal and everything. And the author being named "P. Shauers." It's brilliant.

The book is pretty straightforward in terms of what you're going to get. The humor is kind of lowbrow, but considering the subject matter, it's fitting. Think of it as a real of our so-called president's lowest moments, whether it's wanting to build a wall, calling developing nations "shithole countries," or passing laws that hurt the environment in order to turn a profit. He's an awful, awful, awful man, and this book really shows that. Honestly, it's so terrible that it's almost not funny. How terrible is that? We have a self-parody as a leader, & he isn't even self-aware.

I was amused by this book, so on that quarter it achieved what it set out to do. It's a good parody and manages to capture the style and spirit of the original, but with grown-up content. This would be a fun coffee table book for the furious leftist who also happens to be a connoisseur of irony.