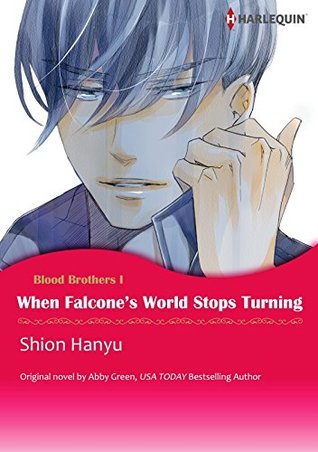 I haven't reviewed one of these Harlequin manga in forever because they stopped going on sale in the Kindle store. Previously, you could occasionally find one or two for $1.99 or $0.99, but for some reason that stopped. I was heartbroken.

And then, Harlequin gave me FIVE of them as ARCs.

WHEN FALCONE'S WORLD STOPS TURNING is a mouthful of a title, and it's based off a novel by Abby Green of the same name. Rafaele Falcone is the CEO of a prestigious luxury car company. When he was a child, he watched his stone-cold bitch of a mom walk out on his dad when he lost everything, and resolved that he would never be humiliated at the hands of a woman in the same way by loving her.

Samantha is working at a university. She used to work at Falcone Motors, but left after her affair with Rafaele soured. She fell in love with him, you see, and on the night that she was about to tell him that she was pregnant, he basically told her that she was too clingy and they were Donesville.

They meet again when the university comes to Falcone asking for a grant. Samantha's current boss accidentally lets it slip that Samantha is a single mother, and when he sees the kid and recognizes the unique green shade of his eyes, he realizes that the boy is his own and that Samantha has been keeping him secret all these years. He, of course, gets angry and blames her, the insidious woman who is only proving his misogynistic theories right, eye roll.

If you're familiar with the secret baby trope, you can probably guess how this works out. If you're not, don't let me be the one to spoil you. Falcone is definitely your typical alpha male billionaire, but he's a shade less cruel than most. The summary on Goodreads is actually quite misleading because it says that Falcone uses his money and power to make "life as difficult as he can for her," but that really isn't the case. Bar an empty threat to sue her for custody, and the rather strange and terrifying decision to move himself into her home without her knowledge or permission, he doesn't really do anything awful to her at all.

I thought this was a light, cute read. I don't normally like children in romance novels but Milo was adorable (and the way he was drawn was just, ahhsdjflsdf, SO CUTE). There were also some pretty hot (but tasteful) scenes in here, including a bit of the ol' kinky stuff. I also really liked Rafaele's biological father, and the scenes with him at the end were touching. If you like romances and you like manga, you really can't go wrong with these Harlequin adaptations. I think they're super fun.