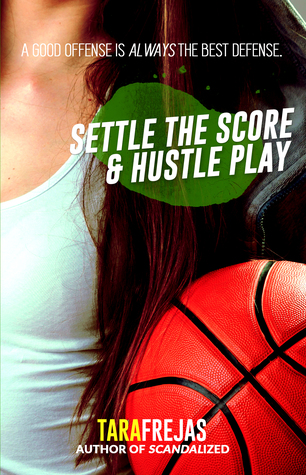 What's this? A romance between a male cheerleader and a female basketball player? Why, yes, of course I'd love to read you - and oh, what's that? You're also free right now? Girl, put down the phone. I'm coming over, and I'm bringing pizza.

This month, a number of Filipino writers are putting their books up for either a discounted price or for free. I'm usually the last to find out about things like these but somehow I happened upon the promotion right as it was starting - completely by accident. Obviously, this means that I've been wading in #OwnVoices this whole week and if there's something better out there to wade in, I haven't discovered it yet.

SETTLE THE SCORE / HUSTLE PLAY is a duology of two short stories about that couple I mentioned in the first paragraph. Garnet is a basketball player and Charlie is a cheerleader. They're both very good at what they do and they're both kind of in like with each other. The only problem is that Charlie has a girlfriend - and she's cheating on him.

SETTLE THE SCORE is about Garnet trying to make Charlie see the truth about his girlfriend, Nica. She intends to convince him but ends up kissing him - in front of everyone - by mistake, which causes all sorts of drama. In HUSTLE PLAY, they're together, but Garnet thinks they're going too "fast" (apparently kissing and hand-holding are "fast"), so she wants them to just be friends. However, she's ~so~ attracted to him, she can't help but feel ambivalent about her decision, especially when the star male basketball player, a boy named Chris, ends up becoming closer to her at a sports even, and their burgeoning relationship begins to push Charlie away.

I've loved most of these romances but there's a handful I haven't really liked all that much, and sadly, SETTLE THE SCORE / HUSTLE PLAY is one of these. I wanted to like it so badly because I'm all about romances that trump (ew, "that man" has ruined that word for me) the gender role status quo and I wanted to give this book props for having a male cheerleader as a love interest, but the characters were so immature that if I hadn't read in the summary that they were in college, I would have thought that they were in junior high, maybe sophomore year, tops. I love drama, but not when it's manufactured over silly pretenses, and there just wasn't much going on. Too bad.