To Love A Highlander by Donna Fletcher 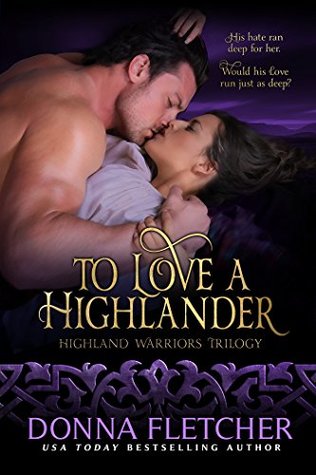 💙 I read this for the Unapologetic Romance Readers' New Years 2018 Reading Challenge, for the category of: Scottish/Highlander Romance. For more info on this challenge, click here. 💙

First of all, big thanks to my friend MG, who was kind enough to lend me this book on Kindle. I was desperately trying to find a Scottish romance to fulfill the category for my romance challenge after the one Scottish romance I owned didn't pan out (spoiler: it was a Maya Banks book). She said this book was one of her favorites, and I love her taste in books, so I was excited to read it.

Unfortunately, even though I am very grateful for my friend's kindness, I didn't end up caring for this book much at all.

The plot is pretty simple. Espy is a talented healer who had an equally talented physician as a father. Her father traveled a lot to foreign lands and learned a variety of experimental and unconventional techniques, which made him a figure of ridicule and suspicion among some of his more orthodox peers. Espy, armed with those same techniques, is overseeing the birth of a Scottish clanleader's wife when we meet her at the beginning of the book. The wife is hemorrhaging and begging Espy to save her child, but the (male) physician present convinces the clanleader that Espy has killed his wife, and she is hurled out of the tent, and informed in no uncertain terms that if she returns, it will mean her death - or worse.

So of course, many years later, Espy returns, because her grandmother Cyra still resides in the village. She's still haunted by that woman's death, but now she has new ghosts to terrorize her as well, in addition to a fresh scar on her face. When the clanleader, a man named Craven, finds out she's back, he fully intends to torture her. But when he sees how sickly and pathetic she looks, he agrees to let her grandmother nurse her back to health just so it will be more satisfying for him to break her later. What a prize, right? Now would be a good time to inform you that this man is the love interest.

When Espy inevitably recovers and is taken to the village proper to receive her fate, she is accosted by many members of the clan who have had to deal without healer or physician this entire time, and have injuries that run the gamut of splinter to serious infection. Craven observes her usefulness and decides that maybe torturing her isn't the best route - especially when new evidence arises that suggests that perhaps the physician and not Espy was the culprit responsible for what looks to have been the premeditated murder of his late-wife.

I liked the healing scenes, because I'm a sucker for healer and doctor characters. It's part of the reason I loved THE KING'S MAN and OUTLANDER so much. There is something selfless about people who devote their lives to the healing of those who are sick or wounded, and I love that. I also thought the murder mystery element of TO LOVE A HIGHLANDER was well done. Sometimes romance novels include murder as if it's an afterthought, something to prolong the tension or to bulk up a skimpy page count, but Donna Fletcher did a good job incorporating it into the story, I thought.

What I didn't like was the hero. He is one of those uber-alpha dudes, the kind who choke women to show off their superior power and get their attention (he chokes Espy several times). When she's his prisoner, he followers her around constantly and berates her for disappearing without telling him where she's going first, which I guess is understandable. However, he does the same thing when he decides he likes her, telling her that he expects to know where she is "at every moment." Ha ha, no. I get that this is a medieval romance, so this mindset is probably accurate, but it was still very annoying, and I didn't really see much to redeem him by the end of the book. I thought he was awful.

Espy also verges on TSTL territory. She's constantly wandering off into the face of danger, and what was frustrating to me is that she's obviously far more educated than a woman of her time would typically be, and given her history you would think that she would have learned caution, but no. Her stupidity was the turning point for many a plot revelation and it was extremely irritating to see the story moved along by such poor decision-making. It really made the plot drag a lot.

TO LOVE A HIGHLANDER isn't a bad book, but it wasn't a particularly good one, either. There were a lot of typos, the writing was pretty basic, and the hero was a turd.

At least I have finally read and finished my Scottish romance challenge, though! :)