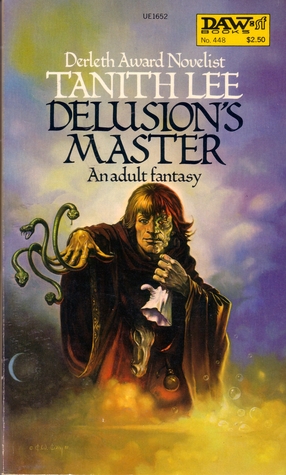 I don't have many "auto-buy authors," but Tanith Lee is one of them, although ever since her untimely passing, I've been trying to limit myself since she only has a finite body of work and she is a writer of such caliber that few can parallel her writing ability, and her words really ought to be savored. Over the last couple months, my friend Elena and I have been working our way through her Flat Earth series, a mythological fantasy clearly based on Greek legends and the bible, set on a flat earth ruled by some very temperamental gods.

The first book, NIGHT'S MASTER, is about the god of darkness, a high-level demon named Azhrarn. The second, DEATH'S MASTER, is about the pale-haired and melancholy Uhlume. The third, DELUSION'S MASTER, is about Chuz, the two-faced god of insanity. One half of his face is youthful and beautiful, but the other is of a disfigured old man. He carries around dice to gamble with and - oh yeah, on one hand, has snakes for fingers. He's basically Mr. Oogie Boogie Man from The Nightmare Before Christmas.

As I said before, Ms. Lee has an amazing way with words. Her vocabulary is exceptional and she matches words with words the way a highly skilled sommelier does food and wine pairings. You want to dive in and consume everything, but since you know what you have in front of you is good stuff, you hold yourself back and force yourself to savor everything slowly. I've read some of her fairy-tale retellings and she has a twisted and disturbing vampire series that I really enjoyed, but I think her style adapts really well to these fantasy stories that sound like ancient legends. As I said in my review of DEATH'S MASTER, she's a firm believer of Chekhov's Gun, or literary cause and effect: events and characters that happen early on in the book appear again, and the story wraps around to develop their fates - often in unexpected or ironic ways. NIGHT'S MASTER was probably the best at this, in my opinion, where the story seamlessly bleeds into each subsequent fable.

DELUSION'S MASTER was my second favorite after NIGHT'S MASTER. Chuz was an interesting character, and his "madness" often led to some comedic moments in this otherwise dark story. I did get bored and set it down for several days because some of the stories in here felt a little two similar to events from the previous book (Jisrin reminded me a lot of a less hardcore version of the leopard queen from DEATH'S MASTER who ended up tearing up death's kingdom). What really ended up redeeming this book for me was the ending, which had Azhrarn, the princess of darkness from the first book. I really liked his character because he reminded me of Jareth from Labyrinth - one of those lyric, icy, ruthless characters who puts the "Gah!" in gamma. He undergoes some pretty intense character development in the last of this book, in an ending that proves to be fairly tragic.

If you're interested in fantasy novels, the Flat Earth series is a great choice. Tanith Lee doesn't shrink from writing about taboo subjects, but she doesn't do it in the way that a lot of new adult authors do, for shock value and attention. I think in Ms. Lee's case, it's more about preserving the integrity of her stories at the cost of her critics: humanity can be unsavory, and she doesn't hesitate to portray it that way when it's relevant to her characters. Even though these are fantasy novels, it gives them a "real" feel that even many realistic novels lack, and makes them feel shockingly progressive despite their age. These aren't my favorite works of hers but I still appreciated the craft of them, nonetheless.