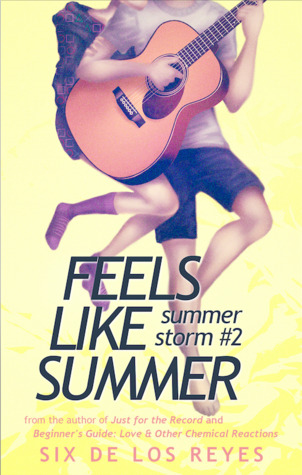 Have you ever read a book that subverts all the tired tropes in one of your favorite genres, while also paying homage to everything that your trashy self absolutely loves about said genre? That's how I felt about FEELS LIKE SUMMER, a book I picked up on a whim because it was free in the Kindle store and because I'd liked the other book I'd read from this author (LOVE AND OTHER CHEMICAL REACTIONS). I wasn't sure how this book would be able to top LaOCR, but oh my God, it did.

FEELS LIKE SUMMER is an #OwnVoices Filipino romance set in the Philippines. Jett, the main character, is at a beach music festival by herself, planning on indulging on sex and booze. She's a looker and knows it, so isn't exactly surprised when she gets accosted by this really hot guy. To her surprise, said hot guy wants her to act as a fake five-minute girlfriend to their bandmate, Adrian, who's broken up over his ex-girlfriend, who's also at the music festival.

It sounds silly, and Jett thinks so, too, but she agrees to do it on a whim and is surprised by how attracted she actually is to Adrian. She makes a pass at him and he accepts - and it is unsatisfactory, which I found refreshing. Especially when she kicks him out for making some judgmental-sounding comments about her. As it turns out, the comments were actually a misunderstanding and Adrian is repentant. More talking happens and Jett decides to make him one of her "projects": she'll sleep with him for about three months, until he can get his act together and get over his ex-girlfriend, or until either one of them starts getting what she calls "weird feelings" (i.e. "commitment").

FEELS LIKE SUMMER is such an amazing book. I loved the fact that Jett, our heroine, is the sexually aggressive, emotionally remote character. Adrian has much less experience than her, and she actually gives him a number of pointers. He is also the one who ends up pushing for a relationship while Jett drags her feet. Later on, we find out why she guards her heart more jealously than a dragon guards its hoard, and some of these moments made my heart heart because nobody deserves to be gaslit into thinking that they are beyond hope.

The friendships and secondary characters were great, as well. Jett ends up befriending her co-workers in the science museum she works at (she's a STEM heroine, guys! she wants to be a science teacher or museum curator!), and Adrian's bandmates are such a warm and endearing cast of characters. The other woman, Ellie (Adrian's ex), is also treated sympathetically. Jett never slut-shames her (which is good, because since she is very much pro-sex, that would be hypocritical) and in fact, refrains from judging her even when Adrian's friends put her down, because she argues that there are two sides to every story.

Other bonuses to this book: Very sweet beta hero who can be rough in the bedroom without being a dominating creep. The heroine has very painful periods which are discussed in this book, and when she gets surprise cramps while staying with the hero, he sends his friends to the store to buy her pads while comforting her and stroking her hair. Video games are mentioned at length - the heroine likes to play RPGs and at one point she and the bandmates all go on a raid together. It's super cute. Honestly, I just want to flail my hands and fangirl endlessly over this book, it was so good. I'm so happy.

Big ups to my friend, Angelina, who buddy-read this with me. :)