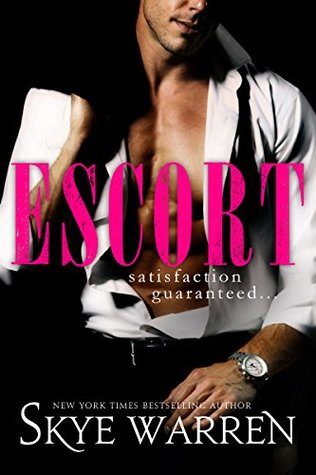 This is the second "male escort falls for sexually innocent client" book I've read in a relatively short period of time, the first being Helen Hoang's THE KISS QUOTIENT. On the surface, the two books are pretty similar. Both heroines are shockingly gorgeous and young, with a special ability that intrigues the hero (musician and economic scientist, respectively), but are held back by a psychological disorder (agoraphobia and autism, respectively). Both heroes are escorts who are mixed race (French/Moroccan and Vietnamese/Swedish, respectively) who end up alleviating both sexual and psychological problems by the grace of their magical dongs, but not without much insecurity and drama.

Bea is a YouTube musician of great renown. Her parents were murdered by pirates (I'm not kidding), and apart from her ward, she has nobody else in the world and lives along in the penthouse suite of a luxury hotel. For reasons that later become clear, she decides she needs an escort to rid her of her pesky virginity, because her agoraphobia keeps her from going out to seek men and the ones she meets within the hotel itself have made it clear that they expect more than just a one-night fling. Enter Hugo.

Hugo was a poor kid in Morocco, and also has no parents. He learned that whores were the ones who made the most money in his country of his class, so when a woman twice his age hit on him as a teenager, he accepted her advances and fell in love with her - until he found out that she was more interested in being his madam than participating in any sort of reciprocal relationship. He's shocked when he finds out that Bea is not just young, but also gorgeous and a virgin. Of course he decides to see to her personally and take things slow, and falls in love with her pretty much instantly.

I can already tell that Skye Warren is going to be one of those authors that I have a love-hate relationship with. I like her Endgame and her Masterpiece series, but the quality of those books is uneven, with some being much better than others. Here, with ESCORT, Warren diverts from her tried-and-true formula of writing messed-up soap operas with gritty characters to attempt something that could be out of a Harlequin novel. The male hooker with the heart of gold, tormented by his past, brought to the heroine's doorstep by fate, or more. And of course, the power of his magical dong is so great that she gets over her agoraphobia without therapy as soon as she falls in love with him, LOL.

To be fair, Hugo isn't a bad character. He's not the cruel, domineering alpha I was expecting. But that kind of made that story boring. Reading a 250 page treatise on why the heroine is the most specialest special to ever tread the halls of special-specialburg is... boring. Also, the romantic nature of the storyline made the darker parts of this book feel super out of place and weird, especially when Damon Scott and Gabriel Miller make cameos. Why would you do that? Why would you remind me of better books I could be reading instead of this one? That seems like a bad play.

I didn't hate this book, but I didn't like it, either. Maybe you'll disagree, especially if you are a little more sold on the "hooker with the heart of gold" stereotype than I am and don't mind your darkness mixed with a heaping dose of light.