The King's Man by Elizabeth Kingston 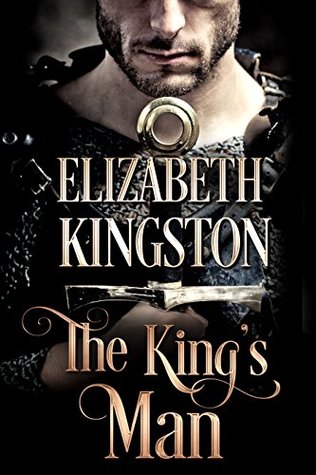 I'm so bad with buddy reads - if I'm not into a book, I take weeks to finish. If I'm obsessed, I'll zoom through it in less than a day. My friend, Sarah, buddy-read THE KING'S MAN with me, but unfortunately the book she picked out was so good, I was done with it in just a few hours. I'm sorry, Sarah. I tried to stop, but the siren call of Ranulf was just too strong. Like Odysseus, I would have had to tie myself to a mast to stop - and I don't have a mast.

First off, anyone who loves Laura Kinsale should pick this up, because Elizabeth Kingston is the first author I've encountered besides Kinsale who manages to write those compelling, angsty historical romances with plausible events and alpha heroes who aren't total jerks and strong heroines who are able to stand up to said heroes whenever they start to toe the line of possibly being a jerk. The medieval setting was fantastic and Ranulf and Gwenllian were amazing characters that I was only too happy to ship. Heck, I'd sail an entire armada for the sake of their love.

When Gwenllian finds Ranulf, he's a broken man half-dead from fever. She's pretty sure he's English scum, which she, being Welsh, cannot stand... but she saves him anyway. As it turns out, he's the very same man who murdered her would-be husband in cold blood. Ranulf is actually wracked with guilt for a variety of reasons and doesn't really want to live anymore. He's grimly amused when he finds himself under house arrest in a Welsh castle with a small army of guards and decides to provoke them into fighting him, so he'll either be killed or given chance to escape. He ends up fighting the youngest and, to his shock, loses - a shock that turns to outright dismay and disgust when he realizes that the young "knight" is actually the lady of the keep, and the same woman who healed his fever.

Gwenllian is the perfect historical romance heroine and the author does a great job subverting the cross-dressing trope. She has good reasons for dressing as a boy and knowing how to fight, and it wasn't something she just happened to pick up and be immediately amazing at - she has years of training. She actually learned how to be a healer because she felt that she should be able to heal any wounds she caused in swordplay, because she's that noble. I also liked how the armor kind of became a metaphor for her uncertainty about womanhood. In the text, we find out she's plain and has crooked teeth and shorter-than-normal hair. When she's forced to wear dresses, she looks awkward, and the first time Ranulf bemoans how ungainly she wears the dresses and how the colors she's chosen are unbecoming. By the end of the book, she starts to feel more comfortable acting like a lady, but Ranulf also finds her unconventional appearance appealing and even grows to appreciate her armor, and it becomes less a crutch she needs to lean on and more like an expression of her true self.

The conflict of this book comes into play with a marriage of convenience, one of my favorite tropes. Ranulf is "the King's Man," and the King in question is who I believe is Edward I, and he was NOT very nice to the Welsh at all. To suppress the possibility of rebellion from Gwenllian's family, he takes the marriage contract bequeathing the property they have been contesting all these years - the property that should have been Gwenllian's because of her proxy marriage to the man Ranulf killed and stole the title from - and has it rewritten so that Ranulf will be titleholder, and the husband. Ranulf is English and Gwenllian is half-Norman and half-Welsh, and even as she grows first sexually attracted to her husband and later emotionally, she finds herself debating where her true loyalties should lie, and this leads to some pretty realistic conflicts that cause all kinds of angst.

The secondary characters were also really great. Gwenllian's mother (who I believe is the heroine of the next book), her squire, and her second in command were all great. I also liked the staff of Ranulf's property, particularly Hugh, and the visiting lady, Suzanna, who ended up befriending Gwenllian (what happened to her? she just disappeared - please tell me she's going to get her own book, too). This is something else that Elizabeth Kingston has in common with Laura Kinsale - and as it turns out, this probably isn't an accident. I actually looked into this, and on her website, Kingston lists Kinsale as her primary inspiration, and Kinsale actually endorsed Kingston's book.

You know what else is good, though? This book. It's self-published so I was a little hesitant, but bar a couple typos and an odd writing style (hard to describe, but when you read some of the dialogue, you'll see what I mean), I fell for this book hard and finished it in what was basically a single sitting. I was lucky enough to get it while it was free, but I wouldn't have been mad paying money for this, either. Read it, especially if you love Laura Kinsale. She's basically the next best thing.