Love and Other Questionable Life Choices by Chi Yu Rodriguez 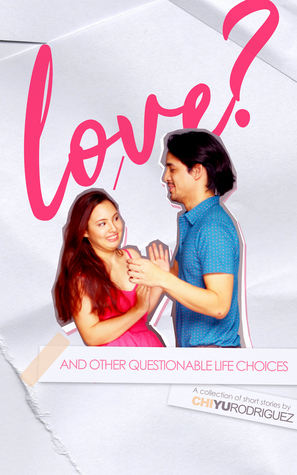 All of these #romanceclass deals are really warming my heart. For this whole month, all of these #OwnVoices Filipino authors are either discounting their books or making them free, so of course you know that I'm all over that like white on rice, because the only thing I like better than a diverse!romance novel is a free diverse romance novel.

LOVE AND OTHER QUESTIONABLE LIFE CHOICES is an interesting book because it is an anthology of three romance short stories, despite being under sixty pages. You might think that is quite a feat, and I thought so, too. It's very hard to write one developed story that's so short, let alone three - unless you're a wizard or named Courtney Milan. I was curious to see how Ms. Rodriguez would go about handling her stories.

This is a short story about two characters named Rae and JR. They are a new couple and meeting the fam for the first time. It's supposed to be really sweet and cute, but the writing style is very basic and unemotional so it felt very boring to read, I'm sorry to say. I was not much into this one at all.

A better story than Starting Line, Old Habits is narrated in first person from the POV of a sexually aggressive girl named Rachel, who kind of reminded me of Six de los Reyes's Jett in FEELS LIKE SUMMER. She's sitting at a bar, scoping out dudes, and is about to go off with one when she runs into her annoying ex-hookup, Geoffrey. So what does she do? She hooks up with him again.

I liked this story a lot more than Starting Line and the sex was pretty well-written. I'm a sucker for a well-written hookup story (see my review for FEELS LIKE SUMMER). My qualm with Old Habits Die Never is that it's much too short to really explore its full potential and ends way too abruptly. I think Old Habits would have worked better as a full length novella than as such a short story.

Five Inches Below the Knee: ☆☆

This is an F/F romance between two Catholic schoolgirls named Punky and Jazz. Neither of them appear to be fully comfortable with their sexuality (for obvious reasons; Catholicism is not always accepting or forgiving towards the LGBT+), but they both like each other too much to really care.

I think this is another story that should have been explored in greater depth because the way it was written about here came across as very superficial since it only really scraped at the surface of some very deep and important issues about sexuality, and the rushed storyline made it feel like the author wasn't really comfortable handling the subject matter, even if that was not the case.

Chi Yu Rodriguez had some good potential offerings in this anthology, but the length presented a major setback to the overall quality of the stories contained in it. I'm sorry I didn't like this more, but there you go. Maybe you'll enjoy it more than I did.