Surrender to Love by Rosemary Rogers 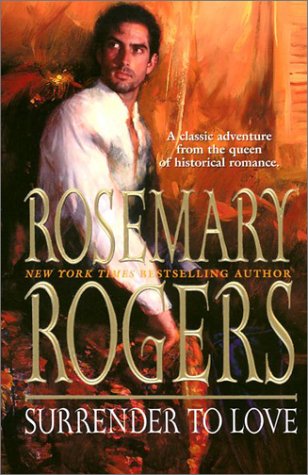 I read this book for the Unapologetic Romance Readers' New Years 2017 Reading Challenge. For more info about what this is click here.

It's difficult to explain my love of bodice rippers to people who don't already enjoy them. The distortion of reality that they reflect is not one that I find desirable at all: They are often brutal, politically incorrect (to the point of being offensive), with spoiled immature heroines and heroes who could just as easily double as villains. Oh, and the writing - the over-the-top, adjective-laden writing, with flowery euphemisms for primary sex characteristics and prose so purple that it makes violets look red.

This is bodice-ripper land. Go big, or go home.

At 700 pages (in my edition), SURRENDER TO LOVE is definitely a big book. It was originally published in 1982 and my reprint by Mira was released in 2003. Often when bodice ripper authors rerelease their older works, they will "clean them up" and remove some of the more un-PC references and rewrite blatant acts of rape into more "acceptable" forced seduction scenes. I was curious to see if Rosemary Rogers, who is fairly well known for her unapologetically OTT plots, would do the same. I haven't read the original version, but if this version is anything to go by, I would guess no.

(If you do know for sure, please tell me. I'm very curious.)

I was reading her author bio on Goodreads and part of what makes SURRENDER TO LOVE so fun is that the beginning part of it seems semi-autobiographical. Rogers, like our heroine Alexa, was raised in Ceylon (now Sri Lanka) in a rich family, and under constant supervision. The descriptions of Ceylon are amazing, not just of the land but of the climate and the people as well. Rogers's exotic setting is part of what makes this book so fun and is reminiscent of titles like Christine Monson's RANGOON (which is set in Burma/Myanmar) and Lane Harris's THE DEVIL'S LOVE (set in the Caribbean). I enjoyed both of these books, but the setting in SURRENDER feels so much more pervasive, and I'm sure that's because Rogers was actually there, and she knew its beauties as well as its disadvantages, and she had seen a lot of the local politics and tensions firsthand.

Alexa is a fairly likable heroine, as far as bodice ripper heroines go. She's feisty and headstrong and sometimes this can make her annoying, but for the most part she is a decent character and I was always (at least halfheartedly) championing her. Nicholas, the hero, is where the fun is really at, though. He's one of those villainish heroes. One who thinks nothing about dub-con (or non-con), who treats women like garbage and goes around whoring and slut-shaming in equal measures. He cheats, multiple times, on multiple people, supposedly murdered his last wife, and appears to think nothing of threatening the lives of the people around him even if they are people he allegedly cares for.

SURRENDER TO LOVE is more of a psychodrama than a romance in the traditional sense, since the characters spend most of the novel - about 680 pages out of 700, in fact - tormenting one another with physical violence, rape, whoring, manipulation, lies, and revenge. For reasons I won't reveal (come on, guys, you have to read it), Alexa wants revenge on Nicholas's family, and her attraction to him becomes just another weapon in her arsenal as she embarks on her vicious quest.

What had she ever done to injure him? Except - the dark demon side of him answered too promptly - except by marrying a very rich man who was too old to please her and finding her pleasure in playing the whore, bitch that she was. Not for the money - that at least would have been halfway excusable - but to satisfy her degraded appetites (380).

"If you had any realization of all the different kinds of pain and degradation and abuse that can be and are inflicted on some human beings by others in the name of 'pleasure,' I do not think you'd have dared indulge your whining, hypocritical little complaints to me of cruelty and the infliction of pain - unless you meant it as a challenge?" (443)

"You can keep your eyes closed or open - it's all the same to me. And you can take off that ugly purple dress you're wearing, and all your damned petticoats and your corset as well - or if you prefer it, I'll rip the clothes off your body myself! But either way, my mermaid, I'll have you naked the way I first saw you; and I meant to use you, my virgin slut, as I should have done then and later. In every way and every fashion I see fit" (474).

Nicholas - such a charmer.

The best way of describing SURRENDER is saying that it's two parts V.C. Andrews and two parts Bertrice Small. It's like V.C. Andrews in the sense of Alexa's father figures have incestuous feelings for her (one of whom has an almost sexual fixation with his own mother), and there's a wicked matriarch type character who runs the scenes and will stop at nothing to have her way no matter how much manipulation it takes. There's also a narrative style that I can only describe as "breathless" - peppered with numerous italics, so you know how important every word is, and how it's emphasized when the characters talk, and many exclamation points so you know it is a dramatic exclamation! It's like Bertrice Small in the sense that Rogers is very cruel to her characters, and has them be very cruel to each other. Someone is raped in a Turkish prison, and decides to inflict that torment on others. The hero is flogged towards the end of the book, and tortured in front of the heroine (something that Rogers apparently does in another one of her books, SWEET SAVAGE LOVE). There's lots of cheating and sexual abuse. The heroine is ambitious and incredibly good at sex, despite her inexperience. Parts of the book take place in a brothel, with some kinky scenes ensuing. This is all classic Small, but Rogers is a much better writer than Small, which makes it even more amusing.

Are these books for everyone? No. But unlike certain romance novels cycling around the popularsphere, SURRENDER TO LOVE doesn't pretend to literary accomplishment. It strives to entertain, instead - and entertain it did. I think this is actually my favorite bodice ripper that I have ever read to date because of the broadness in scope, and the epic journey the characters take across those neverending pages, from hatred to hate-sex to sex-sex to something that's sort of love but probably isn't because relationships like that aren't healthy at all. If you think you're up to tackling the mess, I definitely recommend this book. It will shock, it will disgust, but dammit, it will entertain!