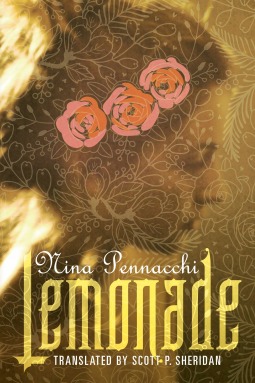 I received an advanced copy of this for review several years ago. Unfortunately, I don't remember what I said about LEMONADE that first time, only that I gave it three stars and was disturbed by the rather brutal rape scene that takes place about 1/3 of the way through the book. And yet, despite only giving it three stars, LEMONADE has haunted me for two years. I kept thinking about Anna and Christopher and their doomed-before-it-even-began romance (if you can bring yourself to call it that). I wondered if perhaps I had been too harsh on the book, because if something can stay with you for that long, it must be good.

LEMONADE was originally published in Italian and then was translated into English. It is written in a very unique way that is difficult to explain - random asides in parenthesis to emphasis certain emotional moments for various characters; some very colorful and strange analogies and metaphors that sometimes fit and sometimes don't but are always unusual; and a charmingly stilted style of writing that is almost anachronistic, but smacks of 80s over-the-top sensationalism.

The heroine, Anna Champion, ends up catching the hero's attention over a misunderstanding with a glass of lemonade. He wounds her pride and she seeks revenge. It is a small, petty revenge, but Christopher is so damaged that his ego cannot stand even that small of an insult, and the next 450 pages consist of the two characters drawing to draw blood, figuratively and literally, any way they can. Some people will not like this because Christopher is such an awful character. He truly is a villain. And yet, it's impossible not to feel sorry for him at times because of everything he went through. Anna is very much the same way. At times I found her to be a very strong character, but she would buckle at random times, too, and sometimes she would be so stupidly petty. They both had issues, and in the end, I feel like the author was suggesting that they deserved one another.

In some ways, LEMONADE reminded me of that Japanese manga/anime, Hana Yori Dango. Christopher is just as cold and impulsive as Tsukasa Doumyoji. I enjoyed the beginning of the book, but after a while, LEMONADE started to feel very repetitive. I still enjoyed it, but I feel I would have enjoyed it more if the pacing had been tighter and it ended about 100 pages earlier. If you're a fan of vintage bodice rippers (and Hana Yori Dango), you should check out LEMONADE. Even if you absolutely hate it, it's highly unlikely that you'd read another book like it published in this day and age.