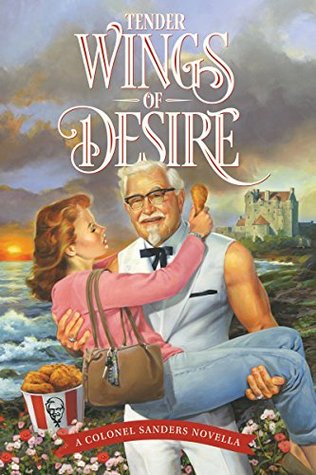 When pictures of this book cover first began surfacing on Twitter, I thought it was some kind of hoax. But, like Peeps-flavored Oreos, TENDER WINGS OF DESIRE was just as real, just as questionable, and just as compelling.

Released just in time for Mother's Day, along with an ad that seems to be channeling Fabio (with bonus lie/lay confusion), TENDER WINGS OF DESIRE is a historical romance novel in which a plucky and spirited heroine falls in love with Colonel Harland Sanders. The cover, which looks like a vintage Harlequin, features smiling Sanders holding a woman in 1950s garb - never mind that this is set in A Historical Era Where Women Wear Gowns™. Who has time to worry about historical inaccuracies? I'm too transfixed by the magically hovering bucket of KFC and the heroine's apparent attempts to tame the Colonel's hair with a chicken drumstick. The roaring ocean waves and Trump Tower-sized castle in the background are just extra.

I began reading this with the expectation that it would be a rip-roaringly ridiculous romp through the wilder side of the romance genre, in the vein of the tongue-in-cheek dinosaur erotica that peaked in popularity a few years ago. But if you, like me, were expecting "I Fucked Colonel Sanders," you're going to be disappointed. This is not Fifty Shades of Gravy™; this is Fried and Frigidity™.

Plucky Madeline's parents are attempting to force her to marry a duke. Not buying this arrangement with a man she describes as a "vanilla biscuit", Madeline flees to a tavern, gets a job as a barmaid of sorts, and falls into insta-love with the Colonel. She sleeps with him immediately, all safely off-screen, and everything seems like pure bliss until she realizes that he's the American version of the gentry - the same class of people that she was attempting to run away from. Oh, the horror of being wealthy! The novella is under 100 pages, but it's worth noting Colonel Sanders doesn't make an appearance until the 46% mark. Before that, TENDER WINGS OF DESIRE is all about Madeline chafing at convention and expressing a yearning desire for unspecified middle-class adventure.

I think most people were going into this expecting comedy - if not "I Fucked the Colonel," then with over-the-top descriptions of thighs that looked like creamy mashed potatoes, and foreplay involving coleslaw and gravy - but it is actually a heartbreaking attempt at a sincere romance novel, made more heartbreaking still by the fact that it just isn't very good. Fried chicken isn't mentioned once, and the novel almost seems to "bait" the reader with the promise of puns to come with lines like this:

Madeline could not help but feel surprised, about what she did not exactly know, but once they reached the docks again she turned to him, her heart bursting with the desire to figure out what was burning in her stomach (69%).

The reader might be inclined to ask, with increasing desperation, whether the answer is KFC® Nashville Hot Chicken Tenders. But the novel just smiles slyly and flounces away, spinning lines of pseudo-romantic drivel so insipidly terrible that even Harlequin would deliver to them the cut direct:

Madeline's heart was pounding so heavily in her chest that she did not think she would be able to breathe; perhaps she would die like this. It would be terribly romantic, would it not? To be killed by such a longing (69%).

To my knowledge, KFC is not mentioned once, nor are any of its products, and Harland's role is only alluded to, briefly, as "magnate of a restaurant industry." Since I was reading this for my romance group, I was determined to see this to the end in the hopes of some grand finale, or at least one bad pun about golden thighs, creamy potatoes, or seeing the phrase "finger-lickin' good" in a non-food-related context. I was disappointed on all counts. The story ends as you might expect of a romance novel: with the two of them sailing away to happiness. All that's missing are the white horses and the technicolor sunset, but perhaps they are saving those for the sequel.

From a marketing standpoint, I do applaud KFC's efforts. We as a society have grown mostly numb to advertising, since we're bombarded with it constantly at all hours, so it's genuinely refreshing to see a company that does something novel in a way that isn't "tone deaf." TENDER WINGS OF DESIRE attempts to parody the romance genre without actually deriding it, and considering how often the romance genre is put on blast for a cheap laugh, that's actually rather sweet.

I managed to get this while it was free, but it appears that it's now 99-cents (unless you have Kindle Unlimited), and I'm not sure it's worth it apart from the sheer lark of reading a romance novel published by a fast food company that has absolutely nothing to do with fast food. The concept is clever and original, but the contents don't match the cover at all. I think they should have either gotten a better writer, or just thrown all caution to the wind and taken the "I Fucked Colonel Sanders" route, because right now TENDER WINGS OF DESIRE reads like a joke without a punchline.