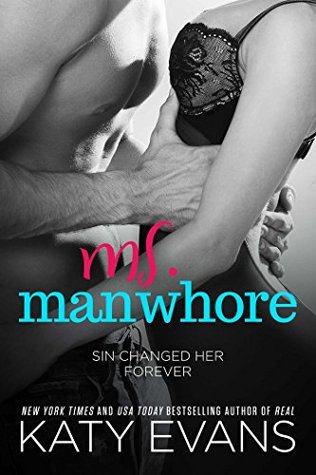 You could bowl me over with a feather after I finished Katy Evan's first book in this series, MANWHORE, and actually thought that it was not all that bad. After all the things people had said about REAL, I was loath to pick up anything by this author, but it turned out to be the perfect example of why sometimes it's good to check a book out despite its bad press. I gave it two-stars, but it was a good two-stars, a solidly okay read, and the perfect guilty pleasure read for a lazy afternoon. Rachel was insecure and annoying, and I got awfully tired of her changing color more frequently than a broken mood ring, but Saint was a decent hero and the sex in the book was - call me shallow - hawt. Repetitive, but hawt, and far better written than I expected.

I bought three books in this series to review for my romance blog, along with various other titles (including CAPTIVE PRINCE AND BAD ROMEO) and despite having low expectations about MANWHORE, I enjoyed it well enough that I was prepared to immediately dive into the companion novella to the series, MS. MANWHORE, and after that, Tahoe's story, LADIES MAN [sic] (I'm fairly sure it should be LADIES' MAN with an apostrophe; Merriam-Webster seems to agree).

First, apparently MS. MANWHORE is #2.5 in the series and I don't have book #2, MANWHORE +1. That's all right. Easy enough to figure out what happened, right? Saint forgives Rachel for the article, dangles her around a bit before taking her back, and obviously it ends with a wedding. Apparently Ms. Evans couldn't help herself, she just had to foist the wedding preparations upon her readers. Because wedding preparations are so fun and romantic. LOL, just kidding. I almost said that with a straight face. Almost. (Sorry, I've watched Bridezillas.)

If you thought Rachel was immature and insecure in the first book (and probably the second), you're going to love the raging cluster of hormones she turns into in MS. MANWHORE. While the feminist in me appreciates the Ms., the feminist in me is also rolling her eyes at all the constant 24/7 lust, jealousy, whining, and crying that went on in this book. When Saint tells Rachel he wants four children, she says, "I'd be fat for almost for years. Of my life!" (27). When they're having their respective bachelor's and bachlorette's celebration, Rachel sits in her apartment with her friends drinking wine and stalking him on social media, presumably trying to figure out what he's doing without her and whether or not he's going to cheat on her (61). I dog-earred that page, because I thought that was the saddest thing I'd ever read - and not ha ha, that's so pathetic, but actually depressingly sad and legitimately upsetting. If you're marrying someone and you're still unsure as to whether or not they're going to cheat on you, it's time for a serious, sit-down kind of adult conversation (without sex) to talk about where you see the relationship going and what your expectations are; and if you are still not appeased after this conversation, do not marry this person. Not if it's going to make you unhappy and have you monitoring their social media to ensure that they are on their best behavior. Therein lies the path to broken dishes and broken hearts.

The mistrust and jealousy continue, with Saint telling Rachel that he wouldn't get her a vibrator as a present because "Why would I want anything inside you other than me?" (82). Then on their honeymoon night, Rachel starts freaking out about her appearance(?) and tells him, oddly, "you deserve for me to smell divine..." pleading with him that "I need...to fix myself" (112). I thought that was so odd, because it's hammered in in the first book how beautiful, skinny, and blonde Rachel is - she even gloats about it herself, which is off-putting and refreshing in equal measures, because (1) Rachel is a twit and I didn't really like her to start but (2) how often do we actually encounter a heroine who feels confident enough about her appearance to own her good looks? But here in this book, it's like Rachel undergoes a complete 180, and constantly puts herself down.

If you really loved the other two books in the Manwhore series about Rachel and Saint, you might love this book. Maybe. I think you would have to love Rachel's character, though, because she's the focus here, and not Saint. I did not like Rachel at all in the first book, and in fact even abhorred her at points in this one. If I had paid the asking price of $2.99 on Amazon, instead of the $1 I got it for at the used book bin, I would have been very unhappy. As it was, $1 was probably entirely too much.