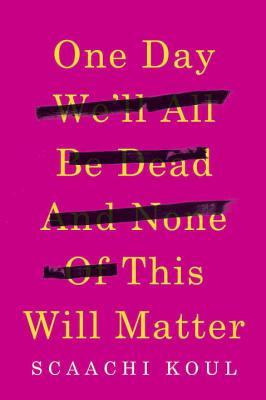 I was notified recently that my library just added a ton of books that I recommended, including several memoirs written by people of color and YA about LGBT+ characters. One of those books was ONE DAY WE'LL ALL BE DEAD AND NONE OF THIS WILL MATTER by Scaachi Koul, a culture writer for BuzzFeed Canada.

I'd been looking forward to this book for a while. I love BuzzFeed and I had heard that this book was going to address many topics like feminism and racism and cultural identity. Plus, it's written by someone who's roughly my own age, give or take a few years, and it's always amazing to read books written from someone in your generation - especially if their observations are written from a different perspective than your own. It's like seeing the world with new eyes...for better or for worse.

ODWABDaNoTWM is about Koul growing up in Canada in the 90s and early 2000s. The daughter of immigrant parents from India, she was in the unique position of being the only "brown person" in an area of Canada that didn't have many minorities at the time (I'm blanking on the exact location, but I believe it was a part of Calgary that was mostly white). She writes, with candidness and humor, about internal and external racsim; sexism; interracial relationships; rape culture; substance abuse; beauty standards; and dating. She's incredibly witty and makes some very cutting observations on Canadian and Indian culture, but she also talks about what she loves about these two different cultures, too, and how they have helped shape her identity and make her into the person she is now. Also, her relationship with her family, especially her parents, is both endearing and hilarious. I love how she includes some of her emails to her dad.

I really loved this book. Koul brings a fresh perspective to the millennial memoir collective, which seems to be mostly overrun by YouTube celebrities and pop stars. Not that there's anything wrong with that, but I prefer books with a little more substance. This is the second book I've read that was written by current- or ex-BuzzFeed staff (the first was I HATE EVERYONE BUT YOU by Allison Raskin and Gaby Dunn) and let me tell you, I am impressed. Both ODWABDaNoTWM and I HATE EVERYONE BUT YOU are pitch-perfect and culturally relevant, discussing many relevant and controversial issues that millennials - especially female millennials - face on a day to day basis.

You should definitely read this.