The Billionaire's Vinegar: The Mystery of the World's Most Expensive Bottle of Wine by Benjamin Wallace 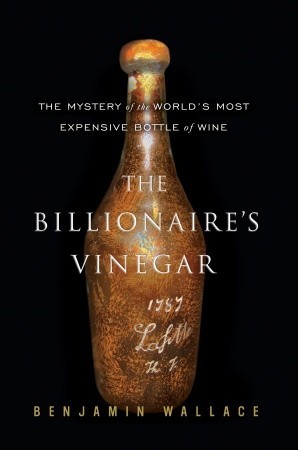 I love wine - love it - but I honestly don't get this fascination with drinking 50+ year old bottles. And I'm saying this as someone who lives in California and drinks good wine all the time. As I sort of alluded to in another book about wine I reviewed, HEDONIST IN THE CELLAR, I think there comes a point where it stops being about the wine and more about the moolah. Perhaps an eighteenth century bottle of wine tastes amazing (I can barely force myself to drink milk that's a week too old, so I am the wrong person to judge). Considering how much those bad boys sell for, it's unlikely I will ever find out. As this book points out, there is a science to the aging process, but a lot of it also seems to be showboating with your money and agreeing with people whom you consider to be generally superior and "in the know" when it comes to wine knowledge. Think "Emperor's New Clothes" except instead of, "Wow, that guy is naked" it's "wow, that guy is naked and drinking fresh-poured Scam Wine™."

THE BILLIONAIRE'S VINEGAR is a delightful comedy of errors about innocent and perhaps not-so-innocent people (we never really know for sure) who end up getting Scam Wine™ instead of the miraculously well-preserved historical wine they thought originally belonged to Thomas Jefferson. When a well-preserved wine cellar is unearthed in France bearing many popular old wines from the 19th century, everyone is excited and quick to bid. But then the taste of the wines and the look of the bottles is called into question and suddenly, everything comes down like a house of cards and friends become enemies, and trustworthy wines become Scam Wines™. Benjamin Wallace crams the whole sordid saga in here, starting with the wine's high octane auction, descriptions of lavish wine-tastings and food-pairings, why people buy old wine (spoiler: bragging rights), what these people are like (spoiler: rich), the quest for the wine's provenance, and then, lastly, a quiet epilogue.

I honestly had no idea that wine forgeries were such an issue. I guess it makes sense, though. Anything high in demand is usually in short supply, to there's a temptation to artificially manufacture additional copies of these high price items and cash in. It was fascinating to read about how Scam Wine™ is made, and the lengths people go to make them look authentic, some going so far as to stain the labels and pit the glass and then coat them with convincing artificial dust (Scam Dust™). I also enjoyed learning about the history of some of these wines. For example, prior to reading THE BILLIONAIRE'S VINEGAR, I did not know about the great French wine blight. For those of you who do not know, an aphid called phylloxera attacked the roots of many French grapes in the late 19th century, causing many of the plants to die. American grapes were apparently immune to the aphids, so the roots of these American grapes were grafted onto the French plants, changing the taste of the grapes - some say for the worse (Scam Grapes™?). So apparently, pre-phylloxera wines are a class of their own and many people seek them out as being more "pure" than modern strains of grape.

It's been a while since I read a good nonfiction book about history and THE BILLIONAIRE'S VINEGAR was the perfect return to that type of book. The writing style is great - colorful and vivid, but not veering into sensationalism and remaining relatively impartial at most times. It's like reading a very fun journalistic piece that continues for almost 300 pages, except wine is involved and you get to experience it vicariously. I read the gripping climax with a glass of petit verdot in hand (read: violet notes), and as I was reading, it occurred to me that the oldest wine that I have ever put into my mouth was only about twelve years old, and even that was almost too strong. When I was telling one of my friends about this book and the old wines mentioned inside, and asking rhetorically what they might taste like, she made a hilarious face and said, "I bet it would taste like balsamic vinegar. I would cook with it." I said, "I bet that would legitimately make someone cry."