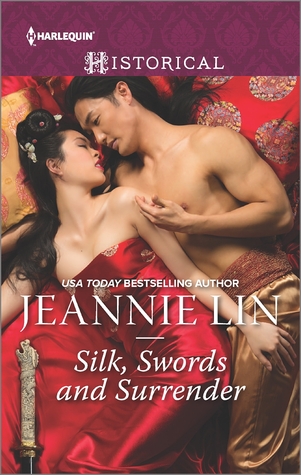 Jeannie Lin has been on my radar for a long time. Not only is she an #ownvoices author of historical romances featuring Chinese characters set in Tang Dynasty China (reason enough to buy her work in my opinion), but she also received an absolutely stellar review from my Goodreads friend Khanh, for her book MY FAIR CONCUBINE (a retelling of My Fair Lady).

When I saw this Harlequin title at the bookstore for 50¢, it was super easy to rationalize the purchase to myself despite my self-imposed book ban (which has been ongoing for about a year now, and clearly not working considering how often I buy books). I wasn't really a fan of her Pingkang Li mystery series, but this was a fantastic way to sample her Tang Dynasty series - or so I thought.

This isn't actually a book in the Tang Dynasty series. It's a collection of short stories set in the Tang Dynasty, some of which are loosely affiliated with the actual main books in the series, but they are not officially part of the series. Also, of the five stories included in this book, four of them have already been published as standalone short stories. Only the first title in this collection, The Touch of Moonlight, is new and previously unreleased. So if you've already read her short stories, take note: this book contains four previously published short stories you may have already read before.

As with all short story collections I review, I'm going to break this book down story by story.

"Was it possible not to know how much you'd missed someone until you saw them again?" (13)

Definitely the best story in the collection. Lian has been in love with Baozhen since she was young, but she knows that he still sees her as a child and is so used to female affection that the only way to snag his attention is to make him jealous. So she pretends to like his friend, Liu Jinahi, and conspires to have Baozhen "help" her get closer to Jinhai, all the while conspiring to win Baozhen.

"If only I could offer you wealth and privilege. Your feet would never have to touch the ground."
"I don't mind walking...beside you" (101).

This was my second favorite story in the collection, because it has an odd fairytale-like feel to it. According to the author's forward, this story was the impetus for her book, BUTTERFLY SWORDS. After Mei Lin is propositioned by the governor, she turns him down because she thinks he's gross and decrees that she won't marry anyone unless they can defeat her in battle. The governor sends thugs to intimidate her, but none can defeat her - none until one day, a stranger named Shen Leung challenges and defeats her. But he claims he doesn't want to marry her, which results in her humiliation.

This story was strange, but I did like it for the most part. The only weird thing about it that put me off and caused me to lower my rating was the fact that after Mei Lin is beaten and nearly raped, Shen thinks this is a fantastic time to have sex with her. That was a big old nope for me.

Still, I couldn't really get that mad at a story about a girl with a sword.

This was another story that could have been a lot better but fell flat for me. Part of the problem with these stories is that they are so short, the author doesn't have time to flesh out their characters. They often have sex very, very quickly for the silliest of pretenses, and she tries to force some sort of connection by mentioning how the two characters in question used to be close. In this story, River and Chen were going to be married at one point, but now Chen has to kill River's brother. To save them, she seduces Chen while her family and servants escape, fully expecting to take the fall.

Incidentally, this story is apparently linked to THE DRAGON AND THE PEARL.

I thought this was the lamest story in the collection. Princess An-Ming is an alliance bride being taken to wed the Khitan lord. She has a secret, though: she's actually a bastard serving girl named Dao ("Peach") who is being sent in the real princess, Pearl's, place after she eloped with someone else. Escorting her is a group of Khitan warriors, including one named Kwan-Li.

This story is lame because it relies entirely on insta-love. Kwan-Li kisses Dao after she falls off her horse, for some reason, and then they have sex before she is delivered to the lord. Then Dao tells him the truth of her origins but that she plans on marrying the Khitan lord anyway. Whut.

Still, it was cool to learn a bit about the Khitan people, who I had never heard about before.

This is a story, as Jeannie Lin describes it, about a scholar and a song girl. Cheng is an imperial scholar who is about to take his exams. One day he is robbed by a group of bandits who have been paid for by the hero, Jia, a concubine who plays the pipa. She has confused him for someone else with a similar name who possesses a pillowbook by the famous concubine, Xue Lin. Jia wants to steal the book because she's been offered enough for it to purchase her freedom and pay her debts. Cheng ends up helping her for reasons of his own. The two end up attracted to one another....

I'm shocked to hear myself say this, but I think these short stories might have been better without all those sex scenes thrown in there. I could buy their affection for one another because sometimes extraordinary circumstances have a way of bringing us close together, but having these women simply shuck off their futures and their dreams for a night of passion didn't feel very realistic. And it happened in every single story, so that I began to roll my eyes every time they talked of "dampness."

SILK, SWORDS AND SURRENDER isn't a bad collection of short stories, though. The writing is decent, and the stories are interesting. I don't think the new story is good enough that it's worth purchasing this collection for that alone if you've already read the other four short stories, however.