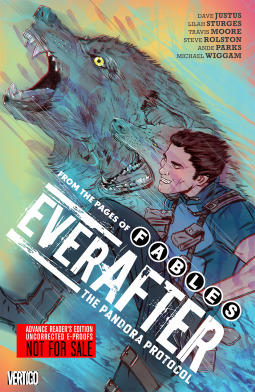 Wow, it's been forever since I finished and reviewed a book (read: days). Is it cheating that it's a comic book? Maybe. But it's a DC imprint - and an advanced copy, at that. Cue excitement, because DC has turned down probably hundreds of requests for ARCs from me over the last four years. They, and Disney-Hyperion, are responsible for crushing so many of my book dreams, that when I found out I'd been approved to read not just EVERAFTER but also SUPERGIRL, I shrieked in disbelief and excitement.

Note to readers of this book: from what I understand from the credits ascribed to this book (and please correct me if I am wrong), the original creator of Fables, Bill Willingham, does not appear to be associated with this work. That was a major bummer to me, because I loved the story of the original Fables series. It had a dark, film noir aspect to it, like Once Upon a Time meets Sin City, and the artwork was fantastic.

The art in EVERAFTER is not bad, either. I like the comic books that go for a more realistic style without super beefed up characters - not everyone has to look like an action figure. It's just as gritty as the Fables I remember, except the gore factor has upped. There were three or four disembowlings in here, to the point where I started to wonder if I picked up an AU version of The Walking Dead by mistake. There are even zombies in here. Zombies. In a Fables spin-off. What is going on?

I don't want to spoil too much and to be honest, I was so confused by the events in this book that I'm not sure I could do an adequate synopsis. But basically, the Fables have created this supernatural agency responsible for protecting humans against magic. The story is set in San Francisco, which I loved, because I'm from the Bay, and involves evil Native American spirits and a girl who can resurrect zombies and who has a unicorn familiar named *snicker* "Mister Prisms."

For most of the book, I considered giving the book a two star rating. The story was too dark and really confusing. I had assumed that because it was a spin-off and the first in a series, I would be able to go in cold. After finishing, I'm no longer sure that's true and am interested in seeing what people who've actually completed the series think. That said, the book started to pick up towards the end, and I loved, loved, the short story at the end about Szymon the magician. That was more what I expected from EVERAFTER: a magical character study, with depth and tragedy and humor. This book gets an extra star solely because of the awesome short story at the back that I almost - foolishly - skipped.

Takeaway points:
1. Way too many pictures of intestines outside of the human body.
2. I still have no idea what the hell was going on for 80% of the book.
3. Jordan Yow is kind of awesome and I want a Mister Prisms plushie of my own.
4. Connor Wolf is sexy AF.