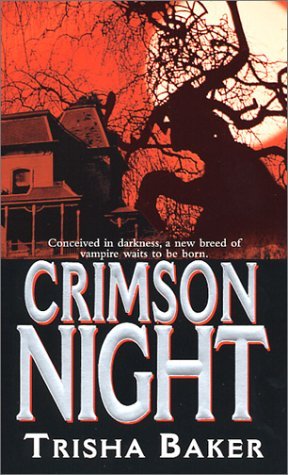 It's not exactly a secret that I like dark romance novels, especially when it comes to bodice rippers and vampire novels. CRIMSON KISS was basically a combination of both, and I really enjoyed it, despite the dark content. And trust me, there was a lot of dark content: sexual, physical, and psychological torture; rape and abuse; bloody or gory descriptions; mentions of pedophilia & bestiality. It could have been a really awful book but I felt for the most part that Trisha Baker handled the content well. The relationship between Meghann and Simon Baldevar was obviously an unhealthy one, and even when she kept going back to him again and again, it was obvious that she was still caught up in his web. CRIMSON KISS made me feel uncomfortable, but it was also an interesting portrait of twisted characters who become infinitely more debauched and depraved with the jaded ennui that comes from immortality.

CRIMSON NIGHT is...not like that. First, let me just say that if you choose to write your (anti)hero as twisted as Simon is, you have two choices if you want him to end up with the heroine: he either (a) has to enter one hell of a redemption arc (and have a viable reason for wanting to do so), or (b) has to completely and utterly break the heroine psychologically, to the point that it becomes a grim Stockholm syndrome mess. I have seen stories that took both routes, and one usually becomes a dark romance, and the other a dark tragedy. Those are really the only two options when it comes to antihero "love" interests, but I got the impression that Baker wasn't sure which route to pick, so she tried to do both at the same time.

It did not work.

CRIMSON KISS was a portrait of abuse. Simon isolated Meghann from her family, tortured her, abused her, forced her to kill and torture others (including her ex-fiance). He came damn close to killing her, just to prove a point! She was kept in isolation, unless he wanted to parade her around in front of others as a trophy to exert his power over her and show just how confident he was that she couldn't escape. When Meghann did escape, she wasn't just trying to kill him for her freedom. No, she was subverting his control, which he took personally. This was the set-up for what I thought was going to be an intense revenge arc, with the two of them resorting to bloody Machiavellian schemes to get back at one another, culminating in either hate-infused lust, or a twisted mutual respect (like the kind that Hannibal had for Clarice).

Instead, in CRIMSON NIGHT, I honestly felt that Baker set about ret-conning the events of the previous book. First, Simon decides that he doesn't want revenge on Meghann because she didn't really mean to kill him. It was an "accident." At first I thought this was arrogance on his part, but Meghann also seems to corroborate this later on. Boom - angsty revenge plot out the window. Second, Meghann starts looking back on her past with Simon with a rosy lens. She talks about the fun outings they had together, how much she enjoyed having sex with him. It's been a while since I read the book, but I don't remember this happening. She was miserable all the time. She was his prisoner. She was embarrassed by his weird kinks and depressed about being his sexual prisoner. Seeing his treatment of her seemingly romanticized like this really put a bad taste in my mouth.

Simon is still a bad guy in this book. His treatment of his sire, Nicholas, was awful. At one point, he uses his mind powers to convince someone to commit suicide. He disparages the two wives he had before Meghann for being unattractive (I think he describes her as being like "lard") and weak, respectively. He refers to the gay vampire, Charles, as a sodomite/catamite so many times that I lost count. There are some graphic descriptions of torture in this book, as in the other, but they are less frequent. Mostly, we just get to see Simon demean other women (and gay people), while Meghann admires his thickly lined pockets, sexual prowess, and predilection for intimidating people.

Then there was some stuff that was just weird. Weird sexual things involving blood and lactation (almost all the sex in this book involves blood, so if that's a squick factor for you, be forewarned). The vampire pregnancy. The science used to explain said pregnancy (this was actually kind of cool). Simon's druidic/alchemical powers. Demon summoning. Entire swaths of the story set in Elizabethan England (and more ret-conning to make Simon look like a more sympathetic character). This story was just...weird. Uncomfortably weird. Weirdly uncomfortable. Uncomforweird.

You're probably asking yourself why I didn't give it a one-star since I hated it so much. Well, that's the thing. I didn't hate it. I hated the romance, and I hated Simon, and by the end of the story I even hated Meghann because she was just so passive and idiotic. But I didn't hate the story. I couldn't put the book down, and finished it in a day. I've never read a vampire story quite like this.

Whether that's a good thing or a bad thing is entirely up to you.